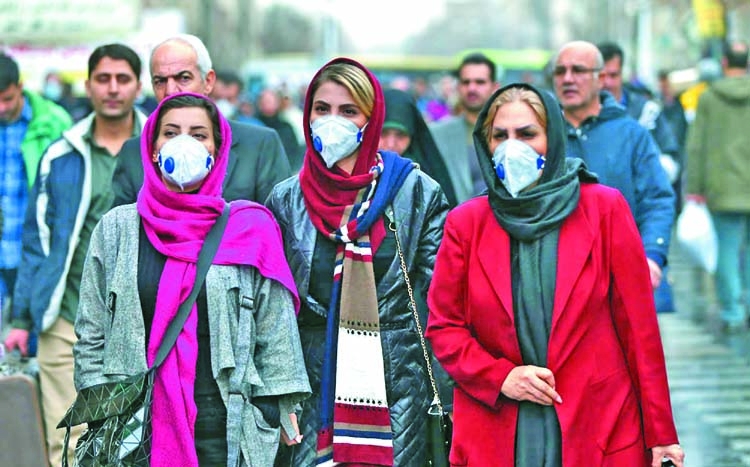 Iran's deputy health minister and a member of parliament have tested positive for the coronavirus as the death toll inside the country rose to 16 and Iranians worried that authorities could be underestimating the scale of outbreak.
Iran has the highest number of coronavirus deaths outside China, where the virus emerged in December and more than 2,600 have died.
"My corona test is positive ... I don't have a lot of hope of continuing life in this world," Mahmoud Sadeghi, the parliamentarian from Tehran, wrote on Twitter. Also among the infected was the deputy health minister, who posted a video online announcing his infection which was shown on state media.
"Among those who had been suspected of the virus, 35 (new cases) have been confirmed and two died of the coronavirus infection," said Health Ministry spokesman Kianush Jahanpur.
He said 95 people had been infected across Iran. Jahanpur put the death toll at 15, but the state news agency later said one person infected by the virus had died in the city of Saveh. Some unconfirmed reports gave a higher death toll.
The outbreak in Iran has coincided with mounting US pressure on Iran's clerical rulers that has hit the economy hard. In 2018, the United States exited Tehran's nuclear deal with major powers and reimposed sanctions.
Worried that official numbers could underestimate the scale of Iran's outbreak, many Iranians took to social media to accuse authorities of concealing facts.
Popular anger has been high for months over the handling of a Ukrainian passenger plane crash in January, which the military took three days to admit was caused by an Iranian missile fired in error.
The incident revived anti-government protests that rocked the country in November against a hike in fuel prices, which swiftly turned political with calls for Iran's rulers to step down, before authorities cracked down.
The head of the Medical Science University in the holy Shia city of Qom, Mohammad Reza Ghadir, expressed concern over "the spread of those people infected by the virus across the city", adding the Health Ministry had banned releasing figures linked to the coronavirus.
---Reuters