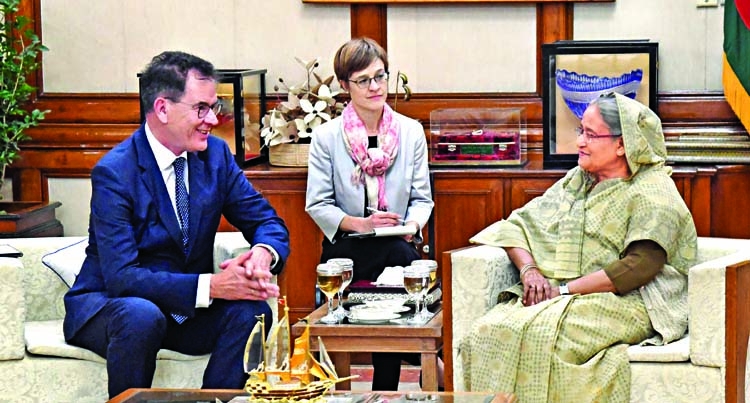 German Federal Minister for Economic Cooperation and Development Dr Gerd Müller calls on Prime Minister Sheikh Hasina at Ganabhaban on Tuesday. -PID
Prime Minister Sheikh Hasina on Tuesday urged Germany to play a more active role over Rohingya issue.
She also called on the international community to put more pressure on Myanmar to take back its nationals from Bangladesh.The Prime Minister made the call when visiting German Federal Minister for Economic Cooperation and Development Dr Gerd Müller met her at her official residence Ganabhaban.
PM's deputy press secretary Hasan Jahid Tusher briefed reporters after the meeting.Prime Minister Sheikh Hasina said Rohingyas are now becoming a burden for Bangladesh as they are creating social problems. "Vested quarters are taking the chance to engage them in terror activities and human trafficking."
She also said Rohingyas are creating big problems for local residents of Cox's Bazar as their numbers are much higher than the locals.Sheikh Hasina said following bilateral discussions with Myanmar, Bangladesh signed an agreement with them to take back Rohingyas willingly. "But somehow it's not working. Myanmar isn't taking back Rohingyas.
They aren't following the agreement," she said adding that Myanmar should take back Rohingyas from Bangladesh immediately.The Prime Minister said identity cards have been given to Rohingyas to ensure security of the area. Talking about almost 1 lakh Rohingya babies born here, she said these babies should have ID cards. "We're providing all types of assistance to Rohingyas on humanitarian grounds."
Hasina said there are many young people who have lost their parents. "It's quite natural that they'll fall prey to human trafficking and it's easy to use them in terror activities. It's quite natural that they'll get involved in these."She said considering the security of Rohingyas and local Bangladeshis, the government is installing fences around camps. "This is for giving them more security."
Talking about more German investment in Bangladesh, the Prime Minister said the government is setting up 100 economic zones across the country and she urged the German investors to come to Bangladesh with more investments. "If they want, we can provide one economic zone exclusively for them," she said.
When the German Federal Minister for Economic Cooperation and Development raised the issue of RMG wages and facilities for workers, she said all the RMG factories in Bangladesh are following the standard process.
Sheikh Hasina said the government has increased the wages of RMG workers by 221 percent comparing that before the AL government came to power in 2009.She mentioned that the minimum wage for the RMG workers was Tk 1,600 at that time while the minimum wage is Tk 8,300 at present.
The Prime Minister urged buyers to pay higher prices while they buy RMG products from Bangladesh as the workers are not getting all the benefits due to lower prices. "The government is giving continuous pressure on the RMG owners, but you (buyers) have to think how much you're paying," she said.
Through the German Minister, she invited the German Chancellor to visit Bangladesh during the programs for the birth centenary of Father of the Nation Bangabandhu Sheikh Mujibur Rahman before her retirement."She can visit Rohingya camps at that time," Sheikh Hasina said, urging the German ambassador to Dhaka to take effective measures to this end.
The German Minister informed the Prime Minister that work on a water treatment plant is progressing for supplying pure drinking water to people living in the eastern part of Dhaka city, including Jatrabari.In reply, the Prime Minister urged him to expedite the work, saying her government would provide necessary cooperation in this regard.
They also had talks on the issues of climate change, renewable energy and other matters related to bilateral interests.Foreign Minister Dr A K Abdul Momen, Prime Minister's International Affairs Advisor Dr Gowher Rizvi and German Ambassador to Bangladesh Peter Fahrenholtz were present.
---UNB