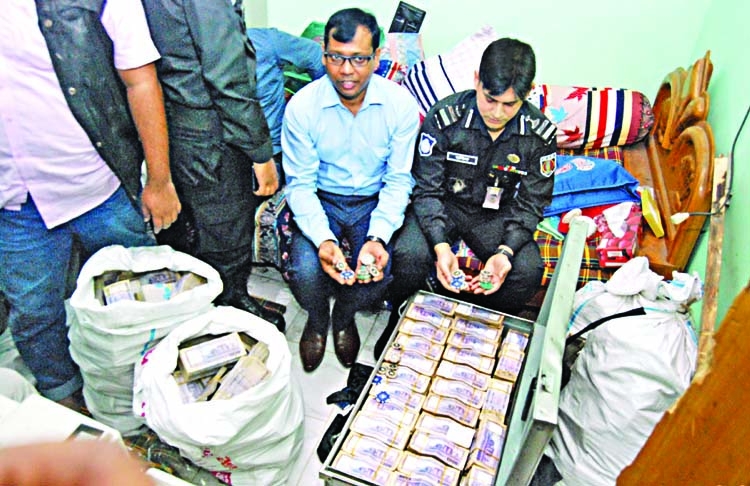 The Rapid Action Battalion has confiscated about Tk 260 million in cash stashed away in five vaults after a raid on another home of Enamul Haque Enu and his brother Rupon Bhuiyan - both leaders of the Awami League's Gandaria wing, who were arrested over their alleged ties to the illegal casino business.
The elite police unit also seized a huge cache of fixed-deposit receipt (FDR) savings, gold ornaments, foreign currencies and casino equipment bearing the seal of Wanderers Club, according to RAB officials, reports bdnews24.com.The drive on the house in Old Dhaka's Lalmohan Saha Street was led by the RAB's Executive Magistrate Sarwoer Alam in the early hours of Tuesday.
They subsequently counted the banknotes using a machine until 1pm. Later, RAB-3 Captain Rafiqul Hassan revealed that the law-enforcement force found Tk 260.55 million in cash and FDR worth about Tk 50.15 million from the residence on the ground floor of the five-storey building.
They also recovered $9,300, 156 Malaysian ringgit, 5,350 Indian rupees, 1,195 Chinese yen, 11,560 Thai baht and 11,560 UAE dirham along with about 1kg of gold."The money and the other objects will handed over to the police. These will later be transferred to the Bangladesh Bank," said Rafiqul.
The house in a narrow alley of Lalmohan Saha Street was unoccupied when the law enforcers arrived but everything inside was kept secure, according to RAB-3's Assistant Superintendent of Police ABM Faizul Islam.
We found out about the house while looking into the two dozen homes of Enu and Rupon. But we didn't make any new arrests there," said RAB-3's Additional Superintendent of Police ABM Faizul Islam.
Enu, a shareholder of Dhaka Wanderers' Club - one of the first establishments busted during the crackdown on casino operations on Sept 18 last year, was the vice-president of the ruling party's Gandaria Thana unit. His brother Rupon was its joint general secretary.
The law enforcement subsequently recovered about Tk 50 million, 8kg of gold and six firearms in raids on the residences of the brothers and two others in Dhaka's Gandaria.
The absconding brothers were arrested from a building in Dhaka's Keraniganj on Jan 13 and implicated in seven cases. The CID is investigating four of these cases, involving charges of conducting illicit casino and gambling activities and money laundering.