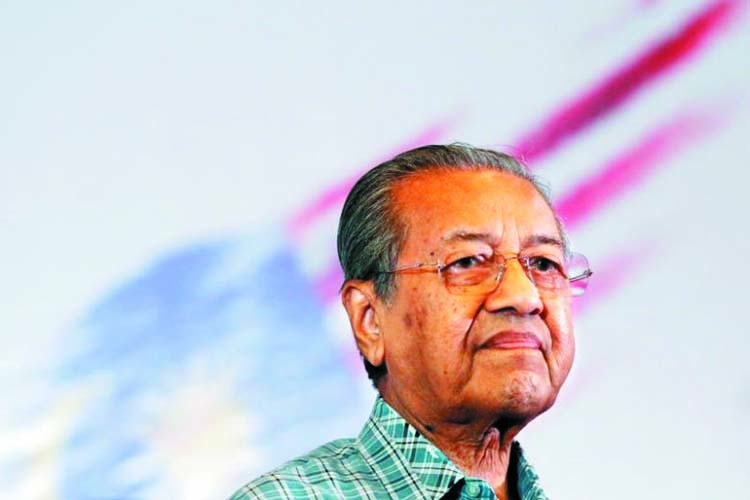 Malaysia's interim Prime Minister Mahathir Mohamad has sought to lead an ambitious grand coalition across the political divide a day after his shock resignation as premier and the collapse of the Pakatan Harapan (PH) government.
The Straits Times understands that Dr Mahathir proposed the idea to Malaysia's main political leaders on Tuesday morning (Feb 25), before the King began a process of interviewing individual MPs over whether they supported the 94-year-old statesman, who has been named by most parties as their choice to lead the country.
"The idea is to step away from extreme race and religious politics and to try politics of national unity," a source familiar with the talks told The Straits Times.
But the plan has already taken a blow, as the two largest Malay Muslim parties Umno and Parti Islam SeMalaysia (PAS) have set a condition that it cannot include PH component Democratic Action Party (DAP), which they accuse of being anti-Malay and anti-Islam.
"If the unity government includes DAP, we are unanimous in that we will not join the government," Umno secretary-general Annuar Musa said on Tuesday evening.He was speaking at a press conference held by Umno, PAS, the Malaysian Chinese Association, Malaysian Indian Congress, and Parti Bersatu Rakyat Sabah (PBRS).
However, a source familiar with the proposal told ST the basis of this "unity government" is to have a "technocratic government supported by all MPs, instead of parties with particular ideologies, and allow good policy to be executed without being politicized".
While Umno may have ruled itself out of a government with the DAP, speculation is mounting that its former vice-president Hishammuddin Hussein may revive previous plans to defect with several other MPs to join a Mahathir administration.

ST understands that the proposal for a unity government was mooted by close advisers to Dr Mahathir, including Tun Daim Zainuddin, a long-time right-hand man and troubleshooter for the elder statesman since his first run as prime minister in the 1980s.
The King is expected to conclude his interviews of all MPs by Wednesday evening. Dr Mahathir is also scheduled, on the same day, to meet Sabah chief minister Shafie Apdal who heads the Warisan party.
A top PH leader told ST he feared that "this unity government plan is over-reaching", given the deep grudges borne by Malaysia's wide array of parties.The DAP is also unlikely to join hands with Umno and PAS. Meanwhile Parti Keadilan Rakyat (PKR) has sacked its deputy president Azmin Ali for "betrayal" due to his alleged attempts to dismantle PH.
The Prime Minister's Office confirmed that Dr Mahathir met party chiefs from the PH coalition and those in the opposition on Tuesday. Others who attended included the president of Parti Pribumi Bersatu Malaysia (PPBM) Muhyiddin Yassin, who pulled the party out of PH, and Datuk Seri Azmin who took 10 MPs with him after being sacked from PKR.
These two figures were instrumental in bringing together the so-called National Alliance which would see opposition parties such as Umno, PAS and Gabungan Parti Sarawak (GPS) backing Dr Mahathir to lead the country until the end of his term instead of handing power over to PKR president Anwar Ibrahim, in accordance with PH's agreement.