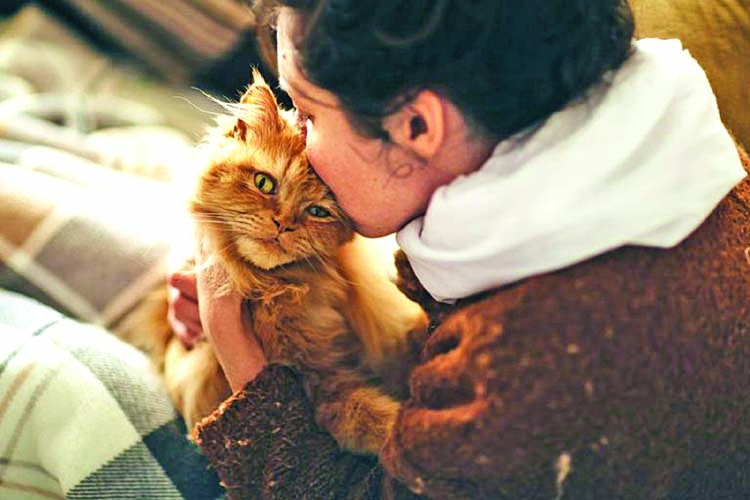 Lesley Young
How do you know if your dog is sad? Or if your cat is anxious? Our pet experts reveal what your pet's feeling.
In an attempt to understand the canine mind more thoroughly, neuroscientist Gregory Berns, a researcher at Emory University in Atlanta, trained 14 dogs to sit patiently through MRI scans so he could examine what's going on inside their brains when they're exposed to different stimuli like an owner's scent or vocal inflection.
He then compared the results to human brain activity. Turns out that when a dog responds to both food and social rewards its brain looks a lot like a human brain when in love.
Berns's findings likely apply to other pets, too. "The closer the evolutionary relationship of the animal species with humans, the greater the similarities in brain anatomy and processing," explains Dr. Mary Klinck, a veterinary behaviourist at the University of Montreal. "This implies similar emotions, particularly in mammals."
For guardians, the challenge lies in recognizing the animal's emotions. To help you understand what your pet is really thinking, here's a handy behaviour interpretation guide.
"Have I told you how much I care about you lately?"
Dogs: "Dogs' emotions are very obvious," says Rory O'Neill, a dog behaviourist and director of the Rocky Mountain Animal Rescue in Canmore, AB. "When they are happy, they actually smile. I've even seen dogs reveal gums in a grin! Also, their ears perk up (depending on the dog) and their tails wag in a relaxed way."
Cats: "When a cat is feeling affectionate and contented, some will roll on their back and stretch out, exposed," says Mieshelle Nagelschneider, a cat behaviourist at The Cat Behavior Clinic in Portland, Oregon, and author of The Cat Whisperer. Happy cats will also approach you with their tails flagpole straight, and when you stare into their eyes, the feline will blink long and slow.
Pocket pets: Guinea pigs make a high-pitched whistling noise when they're excited, says Dr. Klinck. Loud squeaks in other pocket pets, such as rats and hamsters, can be a sign of pain or fear, so she encourages pet owners to look for relaxed or tense body language to help sort out what the noise signals.
"I'm bored, and maybe even a little sad."
Dogs: "House dogs very rarely get sad," says O'Neill. "Abused dogs with post-traumatic stress disorder will have glazed-over eyes. It's a blank stare."
Cats: When cats are restless, some might wander around the house making plaintive mewing sounds, says Nagelschneider. A cat's primary instinct is to hunt, and when they can't express that predatory drive, even in play, they may become despondent, she adds.
"Hey, erectus! Pay attention! I'm frazzled here and you need to do something about it!"
Dogs: "Dogs have an incredible sense of intuition," says O'Neill. When they see or sense something is not right, their eyes dilate, they stop and stare, and their bodies may become rigid." If they're anxious, they'll whine. And if they're fearful, they'll hunker down. "They don't analyze their feelings. But they definitely get upset at humans," adds O'Neill, who says they express discontent by trying harder to get what they want. For example, if they're frustrated about being locked in a room, they may bark louder.
Cats: "Cats developed a meow that is strictly for humans," says Nagelschneider. "It's a combination of a purr and a meow, almost like a baby crying." They use it when they want to get our attention. If cats are feeling aggressive, their pupils may dilate and their coats will puff. "Cats' tails are good emotional barometers," she adds. "If the tail is thumping or thrashing about, it's excited or upset about something."
Birds: When your feathered friend's pupils "pin" (expand and shrink quickly), it could be a sign of excitement. If they lunge, hiss and ruffle their feathers, they're feeling aggressive. Some birds will raise their crests very high when on alert.
Rabbits: Foot or leg thumping is a clear indicator that they're nervous about something, says Dr. Klinck.
Do reptiles have feelings?
Emotions in reptiles are difficult to read because reptiles lack facial and vocal signals. However, while not confirmed, researchers believe reptiles are capable of developing social bonds. For example, they recognize certain people and will approach them to be touched.

The writer is a freelancer