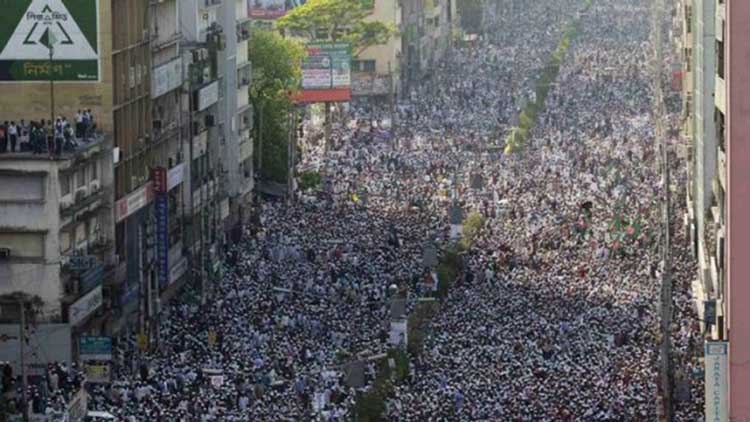 Islamists rally for blasphemy laws and demanding death to "atheist bloggers", Dhaka 2013
Bangladesh is one of only 12 nations in the world that enforces blasphemy laws today.  All except one are Muslim-majority countries; the other, Nigeria, is evenly split between Islam and Christianity.
Several others, such as Australia and New Zealand, have repealed blasphemy laws in recent decades and a few more still have blasphemy laws on the books that have not been enforced for decades.
By the way, there are 50 Muslim majority countries, which means that 78 percent of them do not have blasphemy laws.  So this isn't a "Muslim thing," that non-Muslims like me just can't understand.
Bangladesh, on the other hand, actively uses its blasphemy laws to suppress speech and publications that its prosecutors find "offensive."
And that's a problem for a country that advertises itself as democratic.  First of all, Bangladesh is one of only four of those countries that even pretends to be democratic.  The other problem is that the laws' lack of definition leaves the power to apply the law in the hands of unelected bureaucrats; and, as in Bangladesh, some people who use the law to suppress free speech.
The applicable law in Bangladesh, for example, seeks to punish citizens for intention; that is, the law criminalizes "deliberate" or "malicious" intention of "hurting religious sentiments."  Figuring out someone's intent behind an action is quite a trick that responsible jurists worldwide, especially in free countries with legal systems that protect the innocent, try to avoid.  Who determines intent?
A single prosecutor, a powerful politician, a religious official?  None of that makes good judicial sense.  Do you have to restrict speech so that nobody is offended or only the majority community?  And to be charged with blasphemy, is it necessary to hurt the religious sentiment of only one person or more than one; and if the latter, how do you figure what that number is?  It's a mess, and the history of blasphemy laws demonstrates that.
The real criteria for determining what is and what is not blasphemy was never clear, making an effective defense difficult if not impossible.  I have been involved in several blasphemy cases, and all of them had a political component.
As US Senator Charles Grassley noted recently, "Blasphemy laws are a vehicle for egregious violations of religious freedom and related human rights."  Beyond repressing individuals, it throws a chill on free activities by all journalists and writers, and free speech in general, just knowing that any word they say could be interpreted by an interested person as blasphemous and that their lives could be turned upside down at any moment.
The law, for instance, gives the government unrestricted power to "confiscate all copies of a newspaper if it publishes anything subversive of the state or provoking an uprising or anything that creates enmity and hatred among the citizens or denigrates religious beliefs."  Who determines that?  On what criteria?  It does not sound like a country committed to the rule of law but to the rule of individuals.
Who are the other states with active blasphemy laws?  Iran, Pakistan, Afghanistan, Yemen, Saudi Arabia, United Arab Emirates, Egypt, and Algeria (but who knows what will happen there with its revolutionary changes).  Indonesia and Malaysia, both democracies, also have blasphemy laws.
But with the exception of Indonesia and Malaysia, does that group look like one where Bangladeshis see themselves?  Those countries seem to approach US Senator Charles Grassley's statement about people living "under authoritarian regimes and fac[ing] persecution for faith and religious belief."
Although Sheikh Hasina rejected Islamist calls for new blasphemy laws, she has expressed her support for the existing laws.  In November 2018, she proclaimed that Islam is the religion of the country (thus disenfranchising about 15 million citizens).
"Anyone who pronounces offensive comments against it, or against the Prophet Muhammad, will be prosecuted according to the law."  Again, it is not clear who makes that determination or how is it made; but it certainly does not sound like free speech.
Make no mistake about it (and I know Washington well), the legislation that Senator Grassley supports is a non-binding resolution "for the global repeal of blasphemy, heresy, and apostasy laws."  Senator Grassley, however, the powerful chair of the Senate Committee on Finance and the fourth in line for Presidential succession, along with other supporters, have a number of ways to make it easy or difficult for countries to do business with the United States based on their commitment to religious freedom and the repeal of blasphemy laws.
And take note that evangelical groups, who form a significant part of President Donald Trump's base of support, have cited the Prime Minister statement and Bangladesh's use of blasphemy laws as things that concern them.
I urge my good friends in Bangladesh to join with other democratic countries in rejecting blasphemy laws.