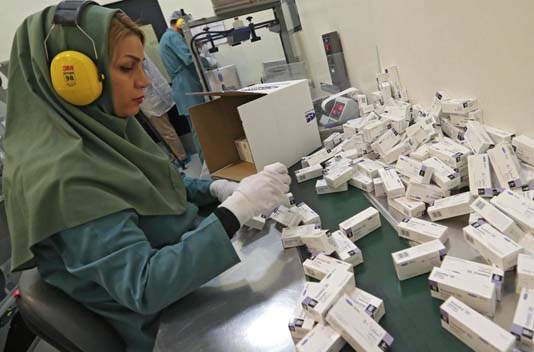 A lab-coated technician leans over a bioreactor at an Iranian pharmaceutical plant producing cancer drugs — a tall order since equipment imports fell victim to US sanctions.
A huge corridor bathed in artificial light and smelling of disinfectant leads to the bioreactor room at the Actoverco factory, to which AFP was given rare access.
Six hundred people run production lines at the facility in an industrial district of Karaj, some 40 kilometres (25 miles) northwest of Tehran.
Technicians wear scrubs, face masks, gloves and surgical caps as they work.
In the bioreactor, cells are multiplied then transferred to tanks for use as cultures to produce medication.
“Much of the equipment that we are using either in production or in laboratory, they are considered as dual-use and they are sanctioned,” said plant manager Reza Mostofi.
“We have many issues at the moment. Because of the sanctions, usually we can’t either transfer the money or the supplier is not willing to sell the machinery that we need.”
– Production stoppage –
As the new coronavirus spreads in Iran, many people have struggled to find medicine — an issue linked to sanctions reinstated by the United States in 2018 after it withdrew from a landmark nuclear deal.
In retaliation, the Islamic republic has gradually reduced its commitments to the deal since May 2019.
On paper, humanitarian items are exempt from US sanctions, but in reality banks tend to decline transactions involving Iran to avoid being exposed to potential litigation.
“The equipment that we are using, the spare parts and everything, now we have a big issue for repairing the spare parts that are needed,” said Mostofi.
For the past six months, he said, the plant has been unable to produce a drug that is essential for treating leukaemia.
“For some time we have not been able to import the ingredients of this material, so our line… is now stopped,” said the English-speaking manager.
The company hopes to produce the active ingredient itself, with a “very big” bioreactor, but it faces almost insurmountable difficulties because of the sanctions.
Iran’s health ministry spokesman Kianoush Jahanpour voiced concern about the situation.
“Regarding cancer patients, we had no problem because we are producing the medicine ourselves… (but) our companies want to renew, rebuild and replace their industrial equipment,” he told AFP.
According to him, there are 500,000 cancer patients in Iran, and it is the second biggest cause of death in the country, claiming 30,000 lives a year.
Actoverco, part of a family business established 40 years ago, also produces the drug interferon beta-1a, used to treat multiple sclerosis.
“We cannot provide the patients as much as we want,” said the company director.
“I hope there would (be) a political solution for this because at the end of the day these are people who are suffering” because of medicine shortages.
He also voiced concern about the new coronavirus.
“Maybe next year there would be a vaccine available (in) some places, but it might not be available here,” he said.
“This winter we had shortages of vaccines” for flu.
– ‘More and more difficult’ –
With the sanctions, “work has become more and more difficult, you feel it every day”, said medical physicist Maryam Yaftian.
The 30-year-old works at Roshana, a private clinic that opened in Tehran three years ago and is equipped with modern facilities.
She points to the difficulty of obtaining supplies including medicine and spare parts for two radiotherapy machines bought from an American company prior to the sanctions.
For troubleshooting, staff at the clinic hold video conferences with Iranian technicians based abroad.
The sanctions have also caused prices to skyrocket for the clinic which is absorbing some of the increase on behalf of its patients, said its director Touraj Norouzi.
In one room, mother of two Seyedeh Hosseini is receiving chemotherapy.
Thanks to financial help from her brothers and father, she feels “lucky” to have been able to undergo treatment for bowel cancer with chemo drugs and an imported infusion pump.
Many patients or their relatives seek chemo treatment abroad as they do not trust the quality of local products.
The director of a Tehran pharmacy, Shahrzad Shahbani, said she had sought treatment abroad at all costs for her mother, who ultimately lost her battle with cancer.
Nevertheless, she said, “If I had a chemo patient right now, I would not advise them to take local drugs.” 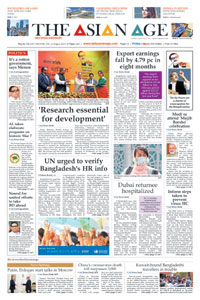