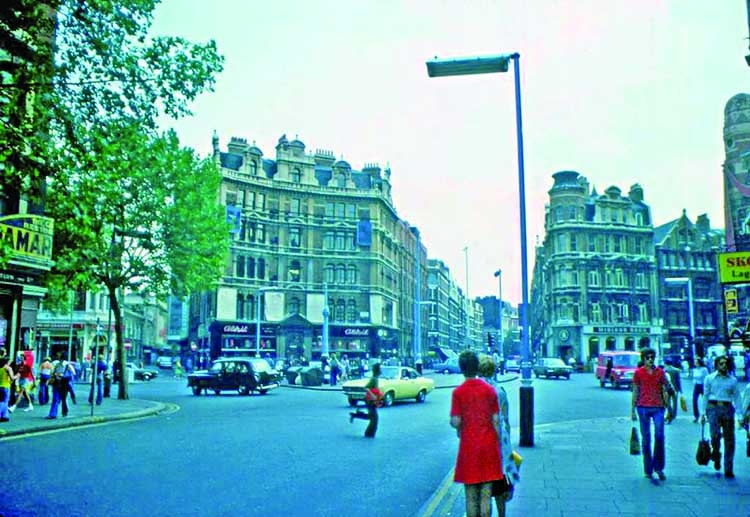 Nothing can be of greater pleasure than a visit to the bookshops on London's Charing Cross Road. It is an experience I go through and savor every time I am in a city which Samuel Johnson extolled so well in his time. Anyone who is tired of London, said he, is tired of life. Those bookshops on Charing Cross Road, dealing in old books, are a potent sign, among so many signs, of why London seeps into your soul. For me especially, a trip to the great city is unsatisfying without a browse through the large collections in those shops.
A few days ago, on a bright day in spring, I made my way to the bookshop that has always had a special place in my heart. 'Any Amount of Books', for that is the name of the outlet, holds perhaps some of the richest collections of old and fairly new books, for reasonable prices, on its shelves.
On my visit this time, it was again to the shelves displaying works on history, biography and literature that my gaze went. In the end, I came away with David Shub's 'Lenin', William Taubman's 'Khrushchev' and David Remnick's 'Lenin's Tomb'. You might wonder at this Russian factor in my choices. The answer is simple: the history of the Soviet Union has been of immense fascination to me. As a schoolboy in 1964, I read of Nikita Khrushchev's fall in October of the year.
That reading of newspapers was an opening to this sense of inquiry in me, taking me all the way to the rise and fall of Mikhail Gorbachev between the mid-1980s and early 1990s. One of the more defining works on the Soviet Union that I have read is Simon Sebag Montefiore's brilliant biography of Lenin's successor, 'Stalin: The Court of the Red Tsar'.
That was a book I picked up at Heathrow on one of my journeys back home to Dhaka quite some years ago. Another work I have in my collection is the memoirs of Andrei Gromyko, which again was a good purchase at Charing Cross Road about a decade ago. The history of Soviet communism, for people of my generation, is a journey through one of the defining political experiments of our times.
My interest in the departed Soviet Union has endured, for a multiplicity of reasons. Reading 'Khrushchev' only rekindles those reasons, for they make me recall the ruthlessness with which Stalin's successor put down the Hungarian revolt in 1956, sending the hapless Imre Nagy to a tragic death.
There has been much criticism of the coarseness in Khrushchev, but when you go deep into a study of the man, you will chance upon the sure shrewdness which underlined his leadership of his country at a time when the Cold War was at its height. He intimidated John Kennedy in Vienna in 1961. But then came the mistake of installing Soviet missiles in Cuba, a condition that pushed Moscow and Washington into an eyeball-to-eyeball situation in October 1962.
A reading of 'Khrushchev' and Remnick's 'Lenin's Tomb' has led me to certain necessary reflections, for the good reason that there is a similarity in the ways in which Khrushchev and Gorbachev were removed from office by their comrades in the Kremlin. Both men were on vacation when the conspirators struck, both men were confronted by their rivals, who would not stop at humiliating them verbally, and asked to resign. But there the similarity ends.
Nikita Khrushchev was divested of authority and spent what remained of his life after 1964 in sad isolation away from Moscow. He died in 1971, but not before he had dictated his memoirs, had them sent to the West to be read and reviewed intensely.
For Gorbachev, things turned out, after he was removed in August 1991, rather differently. Times had changed and the comrades who thought they could take over and save the Soviet Union from the perils of perestroika and glasnost had not considered the power of the populist politics of Boris Yeltsin.
The Russian leader organized the resistance and soon Gorbachev was back, and his enemies sent packing. But if Gorbachev thought he was back in full authority, he was wrong. Yeltsin was unwilling to have him restored to his earlier unchallenged leadership. Indeed, the Soviet Union was already breaking up and Gorbachev would be out of office. In a Soviet Union that finally crumbled, Gorbachev had no powers he could exercise.
All of this is part of Soviet history. Or, you could say, history is that essential component of the human experience that is neglected at grave peril to the individual. As Vladimir Putin seeks to restore Russian influence across the globe, it is the images of the past that go by in our historical memory.
Leonid Brezhnev was followed by Yuri Andropov, who in turn was succeeded by a very ailing Konstantin Chernenko. When Mikhail Gorbachev took charge in March 1985, socialists around the world hailed the arrival of a leader who would extend communism's reach and turn it into a proper intellectual force. What transpired, though, was an anti-climax.
Such were the thoughts in me as I made my way back home from Charing Cross Road.


The writer is Editor -in-Charge of the Asian Age