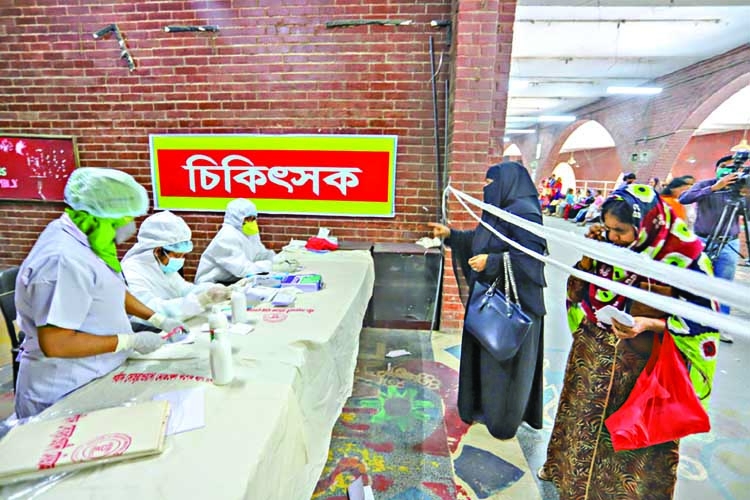 Authorities at Dhaka's Shaheed Suhrawardy Medical College Hospital launch one-stop service designating a separate counter for treatment of flu patients with symptoms like cough and fever, which are similar to those of COVID-19. -Agency
Bangladesh on Wednesday reported its first death caused by COVID-19 as an elderly person became the victim of the deadly virus. Institute of Epidemiology, Disease Control and Research (IEDCR) broke the news in the afternoon.
Professor Dr Meerjady Sabrina Flora, the director of IEDCR at a press briefing in the capital said, ''The victim was over 70 years old having multiple pre-existing complications like chronic obstructive pulmonary disease (COPD), heart problems, high blood pressure and diabetes. He had a heart stenting.''
''So far, as many as 14 people have been tested coronavirus positive with four new cases. Of the newly infected, two are Italy-returnees and one is a Kuwait-returnee. There is a woman among the four.'' she said. A total of 16 persons have been put on isolation and 42 are on institutional quarantine '' she added.
In another development, four doctors of Dhaka Medical College Hospital have been put on home quarantine. Professor Dr Khan Abul Kalam Azad, principal of the college confirmed  it on Wednesday.
He said, ''None of the four doctors is affected. We have sent them on home quarantine because they attended 10 patients and four of whom tested positive.'' The decision to send the four doctors on home quarantine was taken at a meeting of the authorities of Dhaka Medical College Hospital on Wednesday morning.
So far, a total of 14 persons have been infected with COVID-19 in Bangladesh. Of them, three made full recovery and left for home from a hospital in Dhaka. Amid growing panic over coronavirus, many people mostly students are leaving Dhaka with a view to finding safer places as the government announced all educational institutions shut till March 31.
As a result, all the bus and launch terminals and railway stations in the capital were seen crowded on Wednesday. The deadly coronavirus has so far killed more than 8,200 people across the world with at least 203,000 cases of infection. China has recorded 3,237 casualties followed by Italy with 2,503 deaths. Iran has confirmed 1,135 deaths followed by Spain with 598 casualties. The virus has killed 175 people in France and 116 in the USA.
As many as 170 countries and territories have confirmed COVID-19 cases. The Chinese city of Wuhan is the epicenter of the deadly virus.
---Zakir Hossen, AA