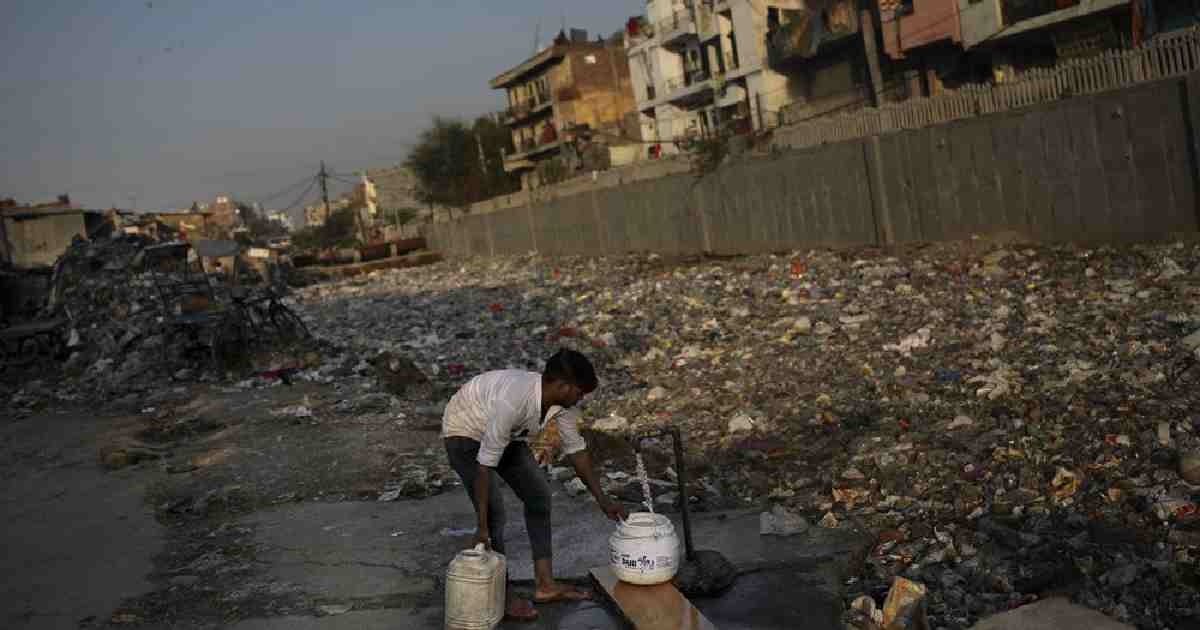 Dharam Singh Rajput can't afford to buy hand sanitizer, which could help ward off transmission of the coronavirus in his community.
The Rajput family could opt for something more basic — soap and water — to achieve hand hygiene. But sometimes there is no clean running water in their neighborhood, which sits next to open sewage canals and mounds of garbage in the heart of New Delhi, India's capital. "The kind of water we have access to has the potential to cause more diseases instead of warding off the virus if we use it to wash our hands," Rajput said.
Experts say keeping hands clean is one of the easiest and best ways to prevent transmission of the new coronavirus, in addition to social distancing. But for India's homeless and urban poor who live in thousands of slums across major cities and towns, maintaining good hygiene can be nearly impossible.
About 160 million — more than the population of Russia — of India's 1.3 billion people don't have access to clean water.
That could leave impoverished Indians like Rajput and his family at risk during the virus outbreak.
"It could prove disastrous for people who don't have access to clean water," said Samrat Basak, the director of the World Resource Institute's Urban Water Program in India. With India being the world's second-most populous country, and having weak health care facilities and growing concerns that there may be an undetected communal spread of the virus, the risks associated with the lack of clean water aren't being overstated. UNICEF said last week that almost 20% of urban Indians do not have facilities with water and soap at home. What could make things worse, experts say, is that social distancing is nearly impossible in many Indian cities that are among the world's most densely populated areas. So far, the government has apparently been able to keep a lid on community transmission of the virus. Authorities have confirmed 147 cases and three deaths, all linked to foreign travel or direct contact with someone who caught the disease abroad.
While the coronavirus can be deadly, particularly for the elderly and people with other health problems, for most people it causes only mild or moderate symptoms, such as fever and cough. Some feel no symptoms at all and the vast majority of people recover.
India's government has made fervent appeals to the public to practice social distancing and good hand hygiene. India also was one of the first countries to essentially shut its borders and deny entry to all but a select few foreigners. But in a country as big as India, community transmission is all but inevitable, experts say.
"Clean water is the first line of defense," said V.K. Madhavan, India chief executive at WaterAid, a global advocacy group for water and sanitation. "If there is no access to clean water, the situation could worsen."
India's clean water problem isn't new.
Hundreds of thousands of people wait in line every day to fill buckets from government water trucks. Hospitals and schools struggle with clean water supplies. People are forced to wash utensils and clothes in dirty water.
About 600 million Indians face acute water shortages, according to government think tank NITI Aayog.
The water crisis hits the poor particularly hard since wealthy people can pay for water from private sources that those living in slums can't afford.
The mortality rate due to inadequate or unsafe water is also high. About 200,000 people die each year in India from diseases related to unclean water. Insufficient water also leads to food insecurity.
"When clean drinking water runs out, people will have no choice but to rely on unsafe water," said Dr. Anant Bhan, a global health researcher. "It could expose India's huge population to extreme vulnerability."
Government promises to provide clean water to many Indians have so far failed despite efforts by Prime Minister Narendra Modi that have been internationally lauded.
"Access to clean water is a basic human right," said Madhavan. "No one should fear losing their life because they couldn't practice the first line of defense, which is hand washing." ___ Associated Press journalist Shonal Ganguly contributed to this report.