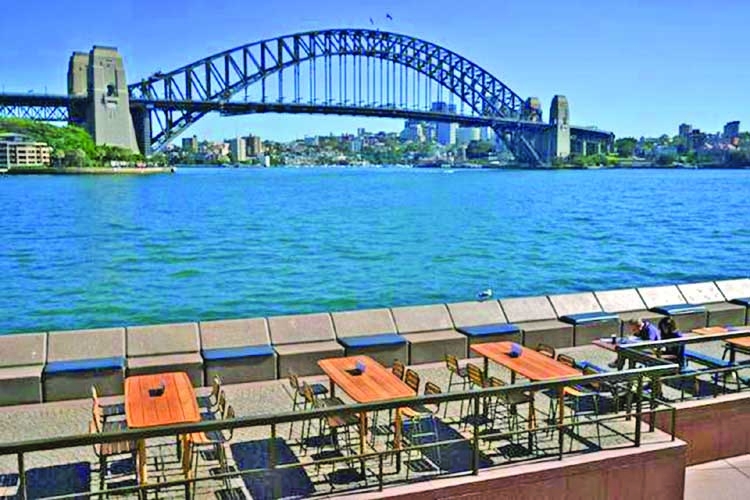 Tables at an open restaurant are seen mostly deserted on a quiet morning at the waterfront of the Sydney Opera House, where scheduled public performances have been cancelled due to the coronavirus disease (COVID-19), in Sydney, Australia, Thursday. -Reut
Australia is closing its borders to foreigners and pumping about A$100 billion ($56 billion) into the economy as it seeks to minimize the blow from the coronavirus epidemic.
Australia has recorded around 600 coronavirus infections and six deaths, a relatively small number compared to other countries, but officials are growing increasingly concerned about the prospect of an exponential rise in cases.
With the majority of the cases originating overseas, Prime Minister Scott Morrison said on Thursday all non-Australian residents would be barred from entering the country from 9pm (1000 GMT) on Friday.In neighboring New Zealand, Prime Minister Jacinda Ardern announced the same measure almost simultaneously, with the ban on foreign arrivals there beginning on Thursday evening.
"For the next six months we need to work together," Morrison told Australians in a televised news conference. "We do need to moderate our behavior and understand things need to change."
Morrison's office said the ban would remain indefinitely. Morrison said the government was working to keep some flights open, as national carrier Qantas and other airlines drastically cut or abandon international operations, to bring Australians home.
The border closure came as the government and central bank ramped up their financial response to the coronavirus outbreak amid fears it will tip Australia into its first recession in nearly three decades and lead to a surge in unemployment.
The Reserve Bank of Australia slashed interest rates in an out-of-cycle cut to an all time low and embarked on a quantitative easing program for the first time, while the government unveiled A$15 billion in loan support for small and medium lenders.
"To help us get to the other side we need a bridge," RBA Governor Philip Lowe said in a speech in Sydney. "Without that bridge there will be damage, some of which will be permanent to the economy and to people's lives."
The RBA, which has been pumping money into the system throughout the week to ensure business and households have access to credit, cut rates to a record low of 0.25%. It also announced a A$90 billion lending package for banks.

The government's package for small and medium businesses adds to a A$17.6 billion announced earlier this month. Treasurer Josh Frydenberg said a planned second package "will be substantially different" to the first, comments interpreted by economists to mean a significantly larger sum.
Widening restrictions on global travel and domestic movement led Qantas Airways Ltd (QAN.AX) on Thursday to put 20,000 employees on leave until at least the end of May as it suspended all international flights and slashed domestic services by almost two-thirds.
Qantas said it is in talks with grocer Woolworths Group Ltd (WOW.AX) about redeploying some of its workers as supermarkets struggle to contend with an influx of shoppers rushing to purchase goods ahead of any broader domestic shutdown, which has so far been resisted by Morrison.
Supermarket shelves are stripped daily of essentials, including milk, pasta, meat and toilet paper, perpetuating panic buying that Morrison has labeled "ridiculous and un-Australian."Economists, however, said any Qantas to Woolworths migration will do little to offset an expected rapid rise in unemployment.
Westpac chief economist Bill Evans has forecast the jobless rate to reach 7% by October, up from 5.3% last month.The small island state of Tasmania on Thursday imposed its own state of emergency, becoming the first region within Australia's borders to do so, ordering people who arrive from mainland Australia to self-isolate for 14 days.
Small Pacific islands, meanwhile, have reported nine confirmed cases of the virus. Most of the island nations, however, do not have the ability to screen for the virus, raising concerns its spread in the region is being masked.
---Reuters, Sydney