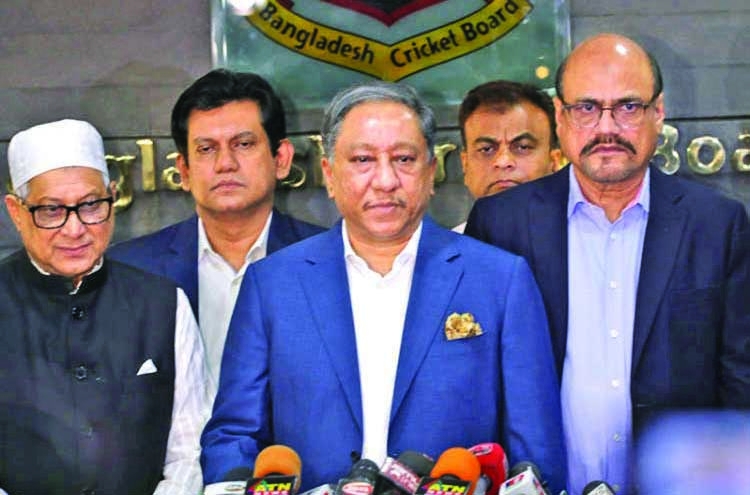 Bangladesh Cricket Board (BCB) President Nazmul Hassan speaks at a press conference. -Collected
Bangladesh Cricket Board (BCB) on Thursday suspended all kinds of cricket in the country for an indefinite period, aiming to prevent the spread of Covid-19 (novel coronavirus).
There is no realistic possibility of cricket returning to the fields until April 15, said BCB President Nazmul Hassan. The board president made the announcement at the Sher-e-Bangla National Stadium in Mirpur on Thursday.
"As you all came to know all sporting events around the globe have been suspended, we also decided to do so. We have earlier postponed Dhaka Premier Division Cricket League. Now we have decided not to host any cricket until further notice," BCB boss said.
"We will restart the game only if the situation gets better. We cannot tell any certain time to resume the game  because we don't know when the scenario will change. I don't think we can start it before April 15, I fear it will take more time," Nazmul added.Meanwhile, BCB decided to observe the situation closely before taking any kind of decision on the Tigers tour of Ireland next May.
Bangladesh is scheduled to leave the country for Ireland on May 8 to play a three-match ODI and four-match T20 International series. The four T20s will be held in four venues of England."As I said, the situation is changing every now and then, so it is tough to make comment on this tour right at this moment," Papon said.
"What we can say that we are observing the situation closely and I think Ireland is also observing. The two boards will definitely discuss on the issue. But there is no decision on the tour as of now," he added.
Earlier, State Minister for Youth and Sports Zahid Ahsan Russell on Monday announced suspension of all domestic sports until March 31 as a precautionary measure. However, BCB then only declared suspension of Dhaka League games scheduled for March 18 and 19BCB issued special medical advice for the cricketers in the country. They are advised avoid public gathering and public transport for the next few weeks.
Earlier, BCB had to postpone a two-match T20I series between Asia XI and World XI which was set to be played to celebrate the birth centenary of Bangabandhu Sheikh Mujibur Rahman, the father of the nation.
Not just in Bangladesh, but also most of the other countries, postponed sporting events to prevent the spread of coronavirus. Bangladeshi authorities confirmed one death and 18 coronavirus cases until March 19