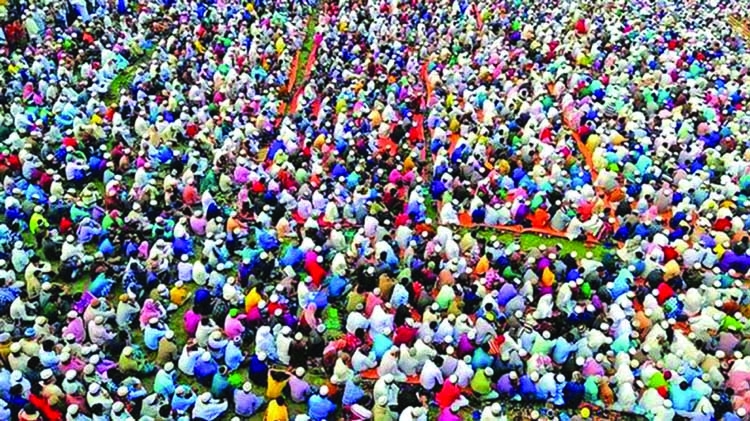 Eyewitnesses say close to 30,000 people attended. -AFP
Tens of thousands of people gathered in Bangladesh for a mass prayer session on Wednesday, amid fears that it could lead to a wider outbreak.Local police chief Tota Miah told AFP news agency that 10,000 Muslims had gathered in Raipur town to pray "healing verses" from the Koran.But some eyewitnesses told the BBC the figure was closer to 30,000.
It comes as a religious event in Malaysia was confirmed as the source of more than 500 local infections there.The event, which was attended by 16,000 people, has also led to infections in neighboring Brunei, Singapore and Cambodia. Malaysia's government later banned all public gatherings in the country and locked down its borders to prevent the further spread of the virus.
A similar mass religious gathering in Indonesia, due to be held later this week, has now been cancelled for fear that a similar outbreak could take place. The religious event at Raipur in Lakshmipur district came as Bangladesh confirmed its first death due to the virus.
Some 17 people in the country have tested positive so far, although many experts are skeptical over the official figures. Miah said organizers did not get permission from the authorities to hold the event - though such local gatherings in Bangladesh often do not rely on getting official permits.
BBC Bengali's correspondent Akbar Hossain spoke to locals who said the event was organised by a religious leader who held a certain amount of "influence" in the small town. He urged people to join him in praying for protection from the virus, and after the event, told people that they would now be "free from the coronavirus".
Our correspondent says that the southern part of Bangladesh is more religious, with people there "passionately believing that Islamic sermons and prayer are able to solve their problems".
According to the Dhaka Tribune newspaper, the prayers performed were that of the Six Quranic Verses of Healing.In Indonesia, a mass religious gathering due to be held over three days, 19-22 March, has been cancelled.Authorities had for days tried to persuade organisers not to go ahead with the event, for fear that it would lead to a mass outbreak in cases.
On Thursday, organisers finally agreed to cancel, but by that time, around 10,000 people - 474 of them people from abroad - had already made their way to Gowa, a regency in the Indonesian province of South Sulawesi, for the event.
Provincial authorities told local media outlets that there were plans to "quarantine" foreign nationals in local hotels for 14 days.
They also said they were reaching out to officials in other provinces to make sure the local participants would be quarantined upon their return home.None of the participants have so far been confirmed to have the virus, but the country now has a national total of 309 confirmed cases, with 25 deaths.
---BBC