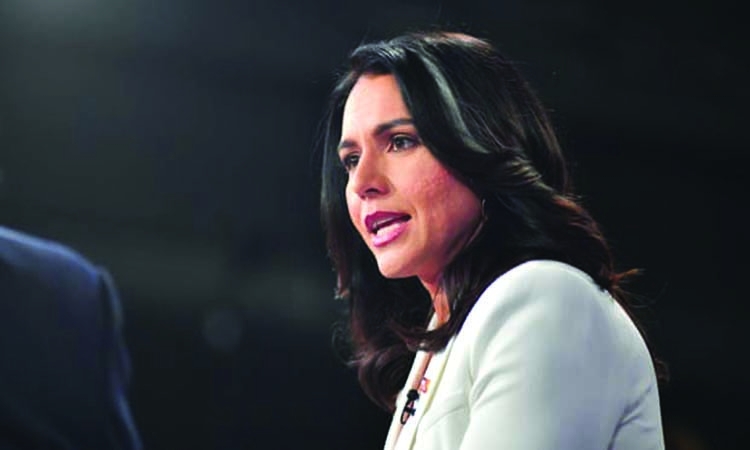 Tulsi Gabbard
The controversial Hawaii congresswoman Tulsi Gabbard has dropped out of the Democratic presidential race. She had been the last woman in the contest - albeit a very long shot from the start - after Elizabeth Warren decided to quit within two days of a poor showing on Super Tuesday.
Gabbard, who won two Democratic delegates, both in American Samoa, endorsed Joe Biden as she suspended her campaign, a surprise move given she was one of few Democrats in Congress to back Bernie Sanders in 2016.
"Although I may not agree with the vice-president on every issue, I know that he has a good heart, and he's motivated by his love for our country and the American people," Gabbard said. "I'm confident that he will lead our country guided by the spirit of aloha, respect and compassion, and thus help heal the divisiveness that has been tearing our country apart."
Gabbard, 38, had assembled an eclectic coalition of anti-war Democrats, independent voters, libertarians and disaffected Republicans, but never drew sufficient support to trouble the better-known candidates.She finished with just 16 votes in Iowa, the first state to vote. In New Hampshire, where Gabbard spent months campaigning, she came in seventh.
On Super Tuesday, 3 March, when 14 states voted, she came nowhere in any of them as Joe Biden charged to the front of the field. The only prize of the night for Gabbard was earning two out of six pledged delegates in American Samoa, the US Pacific island territory where the billionaire former New York mayor Mike Bloomberg won his only contest in the Democratic primary, before dropping out of the race the following day.
The exit of Gabbard, who was born in American Samoa and is of mixed ethnicity, leaves a 2020 field of candidates that began as the most diverse in American history but narrowed inexorably to Biden and Bernie Sanders fighting it out to compete with Donald Trump, all straight white men in their 70s.
Gabbard ran as a progressive, anti-war candidate, frequently stressing her experience as a member of the Hawaii national guard. Her campaign speeches largely focused on the ills of American wars overseas, with Gabbard promising to redirect money from the military budget to social programs.
As her campaign failed to gain momentum, however, Gabbard and her supporters increasingly criticized the media for failing to provide her with enough airtime - although the congresswoman never approached double figures in national polls.Gabbard was seen as a rising star in the Democratic party when she became a member of Congress in 2013, and was appointed a vice-chair of the Democratic National Committee.
She resigned that position, however, to endorse Bernie Sanders over Hillary Clinton in 2016, and continued to chaff against her party when she met with the Syrian president, Bashar al-Assad, in 2017, later questioning the consensus that Assad was behind a chemical attack that killed dozens of people.Despite backing Biden over Sanders, Gabbard thanked the Vermont senator in her announcement.
"I want to extend my best wishes to my friends Bernie Sanders, his wife Jane, Nina Turner and their many supporters for the work that they've done," Gabbard said. Turner is the national co-chair of Sanders' 2020 campaign.She continued: "I have such a great appreciation for Senator Sanders' love for our country and the American people and his sincere desire to improve the lives of all Americans."
Gabbard's moves became increasingly unorthodox in recent months as she strived for exposure.In January Gabbard sued Clinton for $50m in retaliation for Clinton suggesting the Hawaiian was a Russian asset, months after Gabbard filed a $50m lawsuit against Google for allegedly suspending her campaign's advertising.
Ahead of the New Hampshire primary, Gabbard held a Fox News interview where she defended Donald Trump's decision to fire the key impeachment investigation witnesses Lt Col Alexander Vindman and EU ambassador Gordon Sondland.
A day later Gabbard appeared on the conservative Fox News network with Sean Hannity, a friend and informal adviser to the president who has promoted conspiracy theories about Barack Obama, Hillary Clinton and the dead DNC staffer Seth Rich.
---Agency