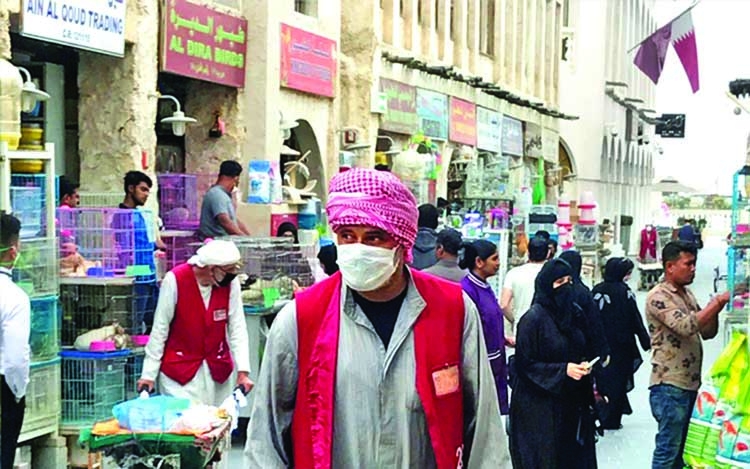 Qatar's old industrial zone has emerged as a hot spot for coronavirus in the Gulf Arab state, putting at risk many migrant workers who live and work in the area of car service centers, warehouses and small shops.
The tiny country, where expatriates comprise the majority of the population, has recorded 452 cases of the virus, the highest number among the six Gulf Arab states that have reported a total of more than 1,200.
Qatari authorities on Tuesday announced the closure of several square kilometers of the industrial area in the capital Doha, which also contains labor camps and other housing units.The energy-producing country relies on about 2 million migrant workers for the bulk of its labor force, mainly from Asian countries like Nepal, India and the Philippines.
"The majority of (coronavirus) cases in Qatar to date have been located in the Industrial Area," the Government Communication Office (GCO) said in a statement on Thursday in response to a Reuters' query.
"Every effort is being made to prevent the spread of the disease in Qatar and protect every member of the population. As a result, some areas of Qatar have been cordoned off to contain the virus," it said, without elaborating.
The GCO did not comment on the total number of people under lockdown in the industrial zone, the total number of migrant workers who have tested positive or the total number under quarantine and in how many locations.
Authorities on March 11 said 238 people under quarantine in a residential compound tested positive for the disease after three residents had earlier been diagnosed. Subsequent announcements have linked most reported cases to migrant workers without mentioning nationalities or specific numbers.
The GCO said authorities were working with employers to ensure payment of salaries and distribution of food, water, masks and hand sanitizer to people in lockdown sites, and people under quarantine were being tested and monitored by medics.
Like other Gulf Arab states, Qatar has taken drastic measures to contain the spread of the virus, including banning non-Qataris from entering and shutting public venues.
Qatar, locked in a dispute with larger neighbor Saudi Arabia and its allies that has seen them impose a boycott on Doha since mid-2017, has been gearing up to host the 2022 World Cup by building venues and scaling up its infrastructure.
Since being named host of the event, Qatar has come under fire for what rights groups describe as poor labor conditions. It has responded by enacting a broad reform program to guard worker rights and improve its image abroad.
The event's organizing body, Qatar's Supreme Committee for Delivery and Legacy, did not immediately respond to a Reuters' query on whether there were any infections among World Cup workers, but said it was working with the government and contractors to ensure the health and safety of all involved.It said World Cup preparations remain on track so far.
---Reuters