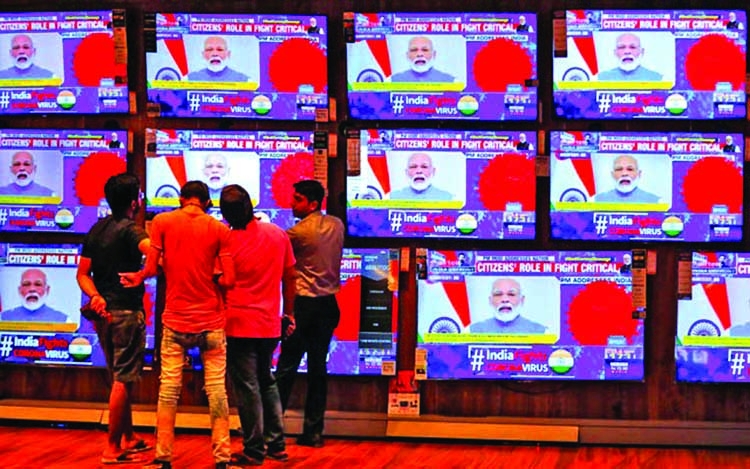 People watch Indian Prime Minister Narendra Modi addressing the nation amid concerns about the spread of coronavirus disease (COVID-19), on TV screens inside a showroom in Ahmedabad, India on Thursday. -Reuters
Prime Minister Narendra Modi appealed to citizens to stay home and avoid panic buying, even as India outlined plans to halt all international flights and rushed to stem the spread of coronavirus cases in the country.
In a late night address to the nation on Thursday, Modi said people should leave "their homes only if essential" and he asked the nation to self-observe an all-day curfew on Sunday.
Modi's plea came shortly after India said it plans to halt any incoming international flights from landing in the country as of 2001 GMT on March 22. Modi also urged Indians to stop panic buying and assured them there would be no shortage of essential goods. His appeal came as retailers said they were struggling to keep up with demand as consumers rush to stockpile supplies.
"We are seeing unprecedented order volumes in all cities in India," said Hari Menon, chief executive of online grocery retailer BigBasket.Densely populated South Asia has so far been relatively unscathed compared to many other parts of the world.
But new COVID-19 cases in India, Pakistan and Sri Lanka are all accelerating, with the total across the region nearing 700. Six people have died.Authorities worry that these countries could be especially at risk should the virus begin to spread locally, due to poor health facilities and infrastructure.
The spread of the virus continued to rattle markets across the region. The Indian and Sri Lankan currencies both fell to a record lows against the dollar on Thursday, while Pakistan's main stock index hit its lowest level in five years."The pandemic has severely affected the economy," said Modi, adding that he has set up a task force to assess the impact.
Sri Lanka said on Thursday it would delay parliamentary elections that had been scheduled for April 25.Earlier this week, the island nation also sealed its borders and imposed a curfew in some areas. There have been 59 confirmed cases in Sri Lanka.
In a bid to stem a sharp slide in the Sri Lankan rupee, the nation's central bank on Thursday ordered all banks to suspend funding imports of motor vehicles and non-essential goods.
Meanwhile, confirmed cases in Afghanistan remained static at 22 on Thursday, despite what experts say is a brewing crisis in the war-torn nation, especially in Herat province, which borders Iran - one of the worst affected countries.
Thousands have been crossing daily across the porous border in that region, with little testing being done on those entering the country, according to an official source.
The number of confirmed cases in Pakistan surged on Thursday to 410. The increase is being driven by pilgrims returning from Iran. Some officials fear with thousands of pilgrims yet to be tested, cases could soar further in coming days.
India late on Thursday also banned the exports of surgical masks, ventilators and textiles used for masks and overalls, while several areas introduced curbs on gatherings as coronavirus cases rose to 173.
Late on Wednesday, the state of Rajasthan invoked colonial-era laws that prevent the unlawful assembly of four or more people - powers more often used to quell riots.
Similar restrictions were introduced in Noida, a satellite city of New Delhi. India's financial hub of Mumbai expanded a partial shutdown of offices to government buildings on Thursday, with at least half the staff ordered to work from home.
In Indian-ruled Kashmir, claimed in whole but ruled in part by both India and Pakistan, dozens of people told Reuters they had been prevented from leaving their neighborhoods by police.Since emerging late last year in the Chinese city of Wuhan, the flu-like disease has infected more than 218,000 people and killed nearly 9,000.
---Reuters