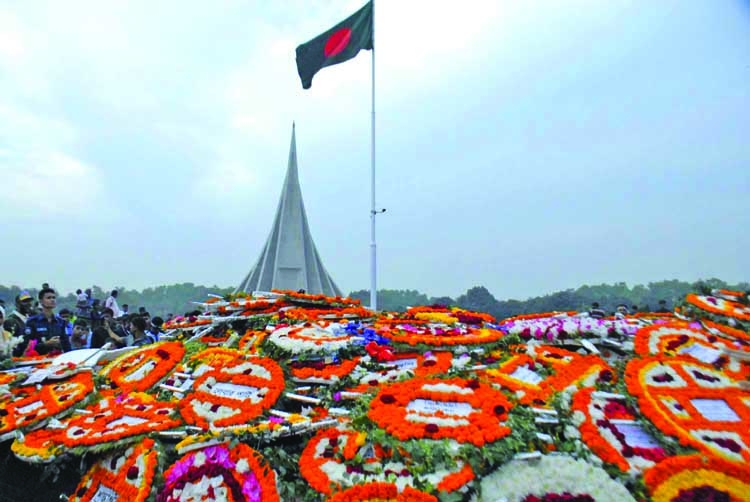 The 20th century has witnessed some glorious movements by various nations all over the globe to achieve their independence and ours is one of them. This is the most outstanding accomplishment of our national life, in fact, our existence. We cannot but record this eventful and remarkable 26 March with due pomp and magnificence as a mark of our special honor and cultural heritage.
I am talking nothing but the Independence Day of Bangladesh- the most blazing red letter day in our national history. It reminds us of the historical and vehement declaration of our independence by Bangabandhu Sheikh Mujibur Rahman, the Father of the Nation, on 26 March 1971.
We had to take huge pain to obtain the independence that we are enjoying and of course of which we are enthusiastically boast of. It is known to all that it has a long history and yet I cannot help highlighting on it briefly to maintain the holiness of the day.In 1947 the British regime in Indian Subcontinent fell and two countries, India and Pakistan, came into being on the basis of religious sentiment.
Bangladesh the then East Pakistan had to experience economic disparity, political injustice and exploitation by its counterpart - West Pakistan, present Pakistan. Consequently, there was a huge trace of dissatisfaction prevailing among the people of Bangladesh - the then East Pakistan.
Add to insult, there was a sedition to them predominantly, when after the Pakistani General Election in 1970 Sheikh Mujibur Rahman, the head of the largest political party, the Awami League with a land sliding win, was not allowed to form a government by Yahya Khan, the Pakistani military ruler and they created one after another impediments on Sheikh Mujibur Rahman's way to become the Prime Minister of Pakistan.
On the contrary, a fabricated charge was brought to him and he was falsely incriminated in the Agartala Conspiracy Case. Nothing could daunt him from his determined valour to free the country from the inconsiderate Pak domination.
On March 7, 1971 he delivered his spontaneous world-famous speech, now the UNESCO documentary heritage,  the in the historic Ramna Race Course ground to encourage and unite the freedom loving people for non-cooperation movement against the Pakistani ruler. Later in the dark night of 25th March, the Pakistani Army arrested Bangabandhu Sheikh Mujibur Rahman and  brutally killed many innocent people launching the Operation Searchlight.
Before his arrest, Bangabandhu declared the independence of Bangladesh in the early hours of March 26. A telegram containing the message was aired several times over Swadhin Bangla Betar Kendra of Kalurghat. Even on the 27th of March the announcement of the declaration of independence of Bangladesh was broadcast on behalf of Bangabandhu Sheikh Mujibur Rahman.
The declaration made an effect like a tonic and all Bengalis became united and started protesting against the attack by the West Pakistani Army. Since then, the guerilla struggle started in full swing and the people took an all-round move to be separate from Pakistan, in search of an independent identity.
The independence of Bangladesh was gained through a nine-month long sanguinary war against the Pakistani Army and their collaborators which resulted in a tragic massacre killing about three million people and a genocide in Bangladesh.
The Mukti Bahini later with the military sustenance from the USSR and India defeated the Pakistan Army which concluded the end of the War of Liberation on 16th December 1971. Then many countries of the world officially documented Bangladesh as an independent sovereign state.
On this day of independence we commemorate with the gratefulness and deep respect our freedom fighters, the martyrs of the War of Liberation and the people who lost their beloved ones. We also show our debt of gratitude to India which not only gave shelter to nearly one cr. of refugees from Bangladesh but also provided us with their strong army under the name of Allied Force to achieve the independence of Bangladesh within the shortest possible time.
Among all the events of that eventful days, stands supreme our national leader Bangabandhu Sheikh Mujibur Rahman, the greatest Bengalee for all ages and times, who deserves all the credit for the emergence of Bangladesh as a free and independent country. He was unconquerable and fearless though he was kept under tremendous pressure in the imprisonment of West Pakistan. Neither he gave in nor bowed down to them.
He did not vacillate to proclaim independence at that crucial moment. It was, undoubtedly, a big step-forward and a milestone in our history of liberation. There was none equaled to the task like him at that time. His continuing determination and fight for the freedom of his country and genuine love for the people led him to the zeniths of grandeur and success:
''The heights by great men reached and keptWere not attained by sudden flight, but they,While their companions slept,Were toiling upward in the night.''
Bangabandhu Sheikh Mujibur Rahman is a peerless symbol of our independence, unity, cohesion, integrity and pride. In connection to it we can cite Rabindranath Tagore: ''Tomar kirtir cheye tumi je mohot'' (Thou art greater then thy achievement).
Today Bangladesh is a role model of development and is held in high reverence for its conversion from the least developing country to the status of developing country by the international community. It has been possible only because of the present government's unremitting efforts and emphasis on the realization of Bangabandhu's dream of Sonar Bangla.
By adhering to his ideals as well as being nurtured by our Honorable PM and decoding  them into action, we shall one day in a glorious morning, be one of the most developed countries of the world. Being inspired by the spirit of the Independence Day I want to conclude with the most cherished words: Joy Bangla Joy Bangabandhu, Long live Bangladesh.