What's left in the tank for the big three central banks? 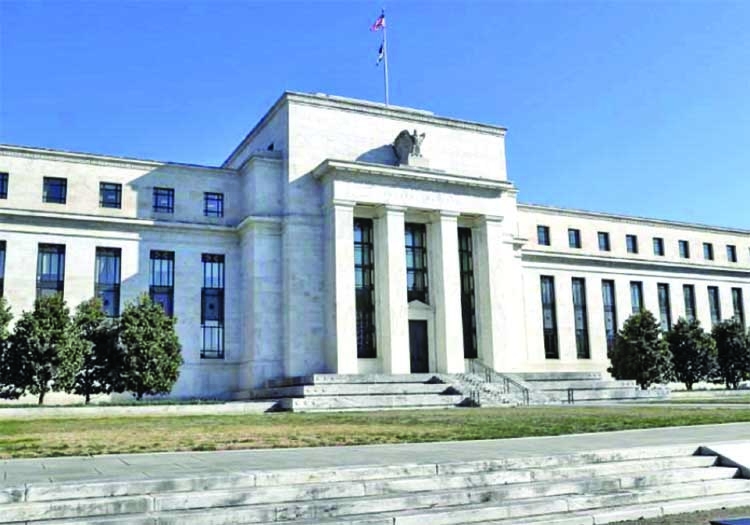 Federal Reserve Board building on Constitution Avenue is pictured. -Reuters
The world's top three central banks have deployed an array of weapons to fight the profound economic threat posed by the global coronavirus pandemic, increasingly seen as likely to spur the first outright contraction in the world economy since the 2007-09 financial crisis.
Many have also cut interest rates significantly and rolled out new or enhanced measures such as asset purchases, liquidity facilities and hard pledges not to raise rates for a long time. Here is a rundown of some remaining tools or steps the largest banks could still take to fight this crisis. TAF - The Term Auction Facility acts as a kind of discount window, the Fed's funding source of last resort, without the stigma that banks hate so much.
The TAF, rolled out in 2008 to combat the financial crisis, auctioned funds to banks so they could make loans. The Fed could relaunch this program under the "unusual and exigent" clause of the Federal Reserve Act, with the sign-off from the Treasury secretary.
TALF - The Term Asset-backed Loan Facility is another financial-crisis era tool that could succeed in getting funds into the hands of small businesses and even households. The facility would bundle loans made to businesses and consumers into asset-backed securities that would then be sold to investors.
As Boston Federal Reserve Bank President Eric Rosengren has already suggested, the Fed could consider adding investment grade corporate bonds to the assets it purchases with its QE program, which is currently limited to U.S. Treasuries and mortgage-backed securities. This would require new authorization from Congress, something the Fed itself has said it is not seeking at this point.
Borrowing a page from the Bank of Japan, the Fed could employ YCC to ensure that bond yields that serve as important benchmarks for consumer and business lending do not rise to levels that begin to choke off credit. Fed Governor Lael Brainard has expressed some interest in such a program, under which the Fed would tailor its purchases toward certain maturities of U.S. Treasuries to keep yields on those where the Fed desires. The Fed has shown no interest in following its some of its peers into the realm of negative interest rates.
QE - Having made clear that self-imposed purchase limits will not stand in its way, the ECB could still increase bond buys further after already pledging to buy up to 1.1 trillion euros worth of debt this year. OMT - The ECB could activate its never-used crisis fighting tool called outright monetary transactions or OMT.
It would allow the ECB to target purchases towards a particular country. A precondition for OMT is that the country must be in a bailout program. However, even a precautionary credit line could qualify under certain conditions. The drawback is that IMF involvement must also be sought.
The are no quantitative limits placed on OMT. The ECB could open its balance sheet to shadow banks to provide them liquidity. While any such move is unlikely to involve all non banks, some experts have advocated extending ECB liquidity to insurers and pension funds. While Europe used to be a bank finance-based economy, the share of shadow banks is rising quickly.
Although the ECB has made clear that there is little appetite for any further deposit rate cuts, it could further cut rates on its liquidity operations, which would serve the same purpose. Its longer-term refinancing operation will be remunerated at minus 0.75% and this could even go lower.
The ECB could increase the range of assets it buys to include things like ETFs. It currently buys sovereign debt, covered bonds, asset backed securities, commercial paper and investment grade corporate bonds. This would involve giving cash directly to euro area residents although it is generally seen as crossing into the realm of fiscal policy. Most see it as a last resort.
BOJ may take its short-term interest rate, now at -0.1%, deeper into negative territory, or accompany the move with a cut to its 0% long-term rate target. That would be aimed at lowering the cost of borrowing for companies and staving off an unwelcome yen rise that hurts Japan's export-reliant economy. But many BOJ policymakers are wary of doing this on concern over narrowing interest margins for banks.
This is seen as a more acceptable policy option. It now pledges to maintain or cut interest rates as long as the economy faces risks that hamper achievement of the BOJ's 2% price goal. It could tie the forward guidance more directly to its price target, or commit to cutting rates under certain circumstances. It is unclear how effective this could be given markets already expect rates to remain ultra-low for the foreseeable future.
The BOJ's current yield curve control is a policy mainly targeting interest rates. Reverting to QE would mean ditching YCC and creating a new policy framework, no easy task. Years of heavy asset buying by the BOJ has also drained liquidity from the Japanese government bond market. Even if the BOJ reverts to QE, the amounts can buy will be limited.
The BOJ could directly underwrite bonds sold by the government to help finance huge fiscal spending. That would go against law prohibiting the BOJ to bank-roll government debt, although it already gobbles up most newly issued bonds from the market.
So the distinction may not matter much any more. BOJ Governor Haruhiko Kuroda has said the BOJ's yield cap already helps the government boost spending by keeping borrowing costs low, and has shrugged off the chance of adopting helicopter money.
---Reuters