US power industry may ask employees to live at work 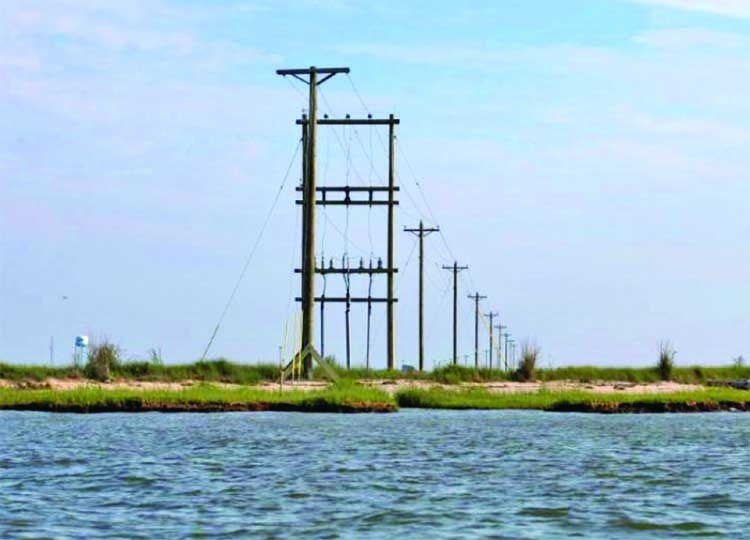 Electric power lines run through the "Uppards," part of Tangier Island. -Reuters
The US electric industry may ask essential staff to live on site at power plants and control centers to keep operations running if the coronavirus outbreak worsens, and has been stockpiling beds, blankets, and food for them, according to industry trade groups and electric cooperatives.
The contingency plans, if enacted, would mark an unprecedented step by power providers to keep their highly-skilled workers healthy as both private industry and governments scramble to minimize the impact of the global pandemic that has infected more than 227,000 people worldwide.
"The focus needs to be on things that keep the lights on and the gas flowing," said Scott Aaronson, vice president of security and preparedness at the Edison Electric Institute (EEI), the nation's biggest power industry association. He said that some "companies are already either sequestering a healthy group of their essential employees or are considering doing that and are identifying appropriate protocols to do that."
Maria Korsnick, president of the Nuclear Energy Institute, said that some of the nation's nearly 60 nuclear power plants are also "considering measures to isolate a core group to run the plant, stockpiling ready-to-eat meals and disposable tableware, laundry supplies and personal care items." Neither group identified specific companies.
Electric power plants, oil and gas infrastructure and nuclear reactors are considered "critical infrastructure" by the federal government. The U.S. Department of Homeland Security is charged with coordinating plans to keep them operational during an emergency. A DHS spokesperson said that its Cybersecurity and Infrastructure Security Agency had issued guidance to local governments and businesses on Thursday asking them to implement policies to protect their critical staff from the virus. "
When continuous remote work is not possible, businesses should enlist strategies to reduce the likelihood of spreading the disease," the guidance stated. "This includes, but is not necessarily limited to, separating staff by off-setting shift hours or days and/or social distancing."
The Great River Energy cooperative which runs 10 power plants serving 1.7 million customers in Minnesota, said it is preparing for the possibility of sequestering staff essential to running its operations. It has a supply of cots and blankets ready at its main control center if it decides to keep critical workers on site to keep them healthy.
"We saw this coming," said Mike McFarland, the co-op's director of enterprise risk management. He said Great River drafted a detailed pandemic plan after the H1N1 bird flu crisis in 2009 and dusted it off a few weeks ago.
The cooperative has currently only activated its "medium threat level" plan, which required it to configure facilities to give more space between employees and to allow non-critical employees to work from home.

But McFarland said sequestering could happen if the coronavirus hits the region hard. He said the protocol, which could keep workers from the outside world for weeks, would be "effectively voluntary" but did not elaborate. He said the company is planning for a scenario of losing up to two-thirds of its staff during the outbreak.
Reuters contacted a dozen other power providers, all of whom said they were implementing plans to moderate risks to their employees and to ensure continuity of service, but who declined to comment on whether sequestering staff was a possibility.
In New York, Consolidated Edison Inc (ED.N), which provides power to around 3.3 million customers and gas to about 1.1 million customers in New York City and Westchester County, said it was taking steps to keep critical employees healthy, including separating some control center personnel to other locations where they can perform their work.
Duke Energy Corp (DUK.N), which provides power to 7.7 million customers in six states and gas to 1.6 million customers in five states, said it instituted additional worker screening measures, such as temperature checks, at generating and other critical facilities.
Puget Sound Energy, which serves more than 1.5 million customers in a region hard hit by coronavirus, said all non-essential workers are working remotely, and the utility has limited access to facilities that provide critical operations.
Jimmy Slevin, president of the Utility Workers of America, a union representing 50,000 members, said the organization was aware that as the coronavirus outbreak develops, essential employees such as plant operators could be called on to work longer hours - or remain on site. "There is only a certain amount of trained operators that run these power plants. We need to make sure their health is at the utmost," said Slevin.
---Reuters, Washington