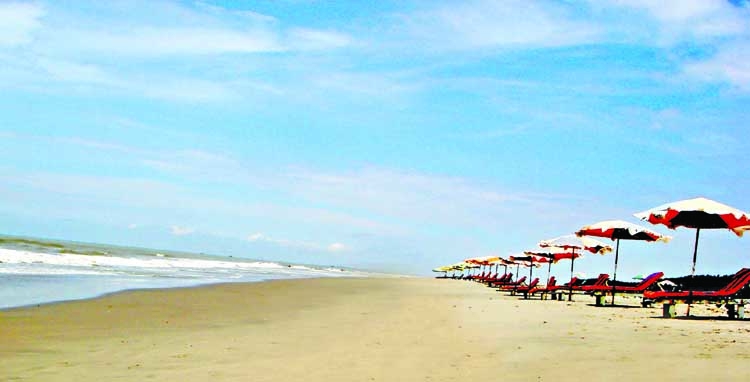 Cox's Bazar sea beach gives a deserted look after the local administration banned public gathering and tourist arrival there. -AA
Police in Chattogram have banned social gatherings in clubs and community centres for an indefinite period in a bid to stem the spread of the coronavirus. On Thursday, the Chattogram Metropolitan Police asked the owners of clubs and community centres not to accept any booking for any social event.
The directive will also be applicable to the hotels that rent out their venues to host social events, Additional Deputy Commissioner Abu Bakkar Siddique told bdnew24.com. Earlier, CMP banned any gathering at Patenga beach, Foy's Lake and Jamburi Park in the city that pull in a lot of visitors.
Police have taken this initiative after images went viral on social media, showing a large number of people are gathering at Patenga beach. It happened at a time when the government is advising people to avoid public gatherings to curb the risk of coronavirus spreading.
Police also put up banners, handed out leaflets and made announcements over loud speakers to raise awareness about avoiding public gatherings. Apart from that, tourist spots in Chattogram district were also shut down.
Two more persons were diagnosed with COVID-19 in Bangladesh on Tuesday, hours after the authorities announced that the first three cases had tested negative. Of the new patients  both males one returned from Italy and the other from Germany around two weeks ago, State Minister for Foreign Affairs Shahriar Alam told. In another development, Bangladesh decided not to issue on-arrival visas for all countries.
It also decided to suspend travel to and from Europe, except for England, until March 31 to contain the spread of coronavirus in the country. Europe is now the new epicentre of the corona pandemic, according to World Health Organization.
Foreign Minister AK Abdul Momen and Health Minister Zahid Maleque jointly announced at a press briefing at State Guesthouse Padma in the capital. Shahriar Alam and Foreign Secretary Masud Bin Momen, among others, were present at the briefing.
Earlier, several countries, including Kuwait and Qatar, suspended air communications with Bangladesh and other countries to fight the virus, which has spread to 135 countries and territories, leaving 5,764 people dead. Contacted, Prof Meerjady Sabrina Flora, director of the Institute of Epidemiology, Disease Control and Research (IEDCR), said, "They tested positive today and are now at a hospital." She said more information would be disclosed.
Earlier in the day, at another press conference, the IEDCR director said the third person, out of the three reported coronavirus cases in Bangladesh, was found to be free of the virus in the latest tests. "We'll conduct another test after 24 hours to confirm if the person has fully recovered," she said.
Meanwhile, nine people were kept isolated and four others institutionally quarantined at different hospitals after they showed symptoms of novel coronavirus, said the IEDCR. On March 8, the IEDCR had announced that three people, including two Italy-returnees, were detected with the virus. Two days later, IEDCR tested them again and found two of them to be free of the COVID-19 infection. After a follow-up test, the institute confirmed it.
One of the two recovered people was also allowed to go home. The IEDCR tested the third person again on Friday. "We want to give you good news  the third person was found negative to corona infection on Friday test," said Flora. The IEDCR director said they would carry out another test. "If the test result comes negative, we'll let him go."
The IEDCR tested 24 more people in the last 24 hours till 12:30pm and has so far tested 221 people for the virus, which was declared a global pandemic by the WHO. At the briefing, Abdul Momen said the government suspended on-arrival visas for all countries for two weeks from today to keep Bangladeshis safe. He said passengers would not be allowed to enter Bangladesh from any European country, except England, until March 31."
We must protect our people," Momen said adding that four of those found infected with coronavirus came from abroad while the other contracted the virus from her husband. He said they would observe the overall situation in the next two weeks.
The foreign minister also said all decisions are taken in the interest of the people of Bangladesh.He reminded journalists that the government even cut short the March 17 mega event on the birth centenary of Father of the Nation Bangabandhu Sheikh Mujibur Rahman.Meanwhile, around 150 Bangladeshi expatriates are scheduled to arrive at the Dhaka airport today from Italy, which is the worst coronavirus affected country after China.