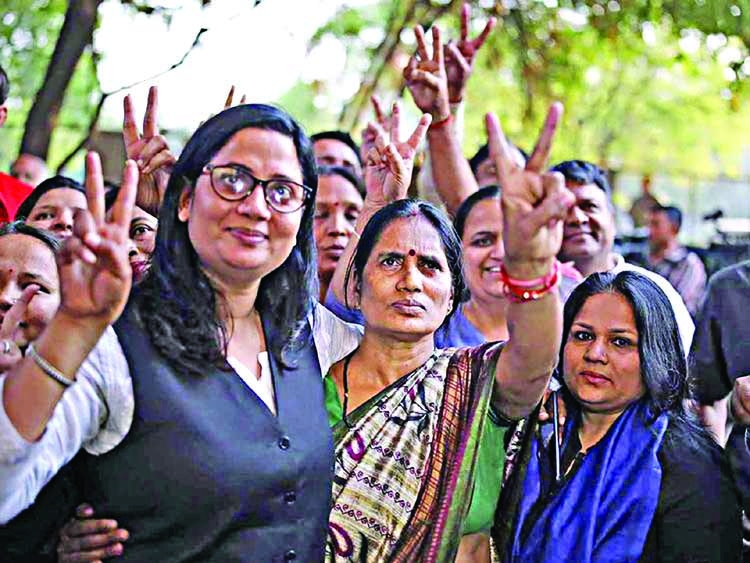 Asha Devi, center, mother of the victim of the fatal 2012 gang rape on a moving bus, displays a victory sign with her lawyer after the rapists of her daughter were hanged in New Delhi, India on Friday. -AP
The four Nirbhaya convicts - Akshay Thakur, Mukesh Singh, Vinay Sharma and Pawan Gupta - spent a restless night as they awaited their hanging in the wee hours of Friday. They wanted to see each other, but Tihar Jail authorities denied the permission.
Sources inside the high-security prison, which went into a lockdown mode prior to the most anticipated execution of the four men convicted for the brutal gang-rape and murder of a 23-year-old medical student in 2012, told IANS that at around 12 midnight, the hangman from Meerut,
Pawan Jallad, was allowed to see the faces of all the four convicts, whom he was to execute in the next five-and-a-half hours, for the first time. All four were asked to go to sleep early Thursday night ahead of their execution but they remained wide awake till late.
They were asked to take a bath but none of them did. All of them were served their last meal but one of them refused breakfast before being taken to the gallows, an official said.According to officials, the convicts even started to behave hysterically and misbehaved with the police personnel keeping an eye on them.
Prior to the hanging, the executioner, who woke up at around 4 am held a meeting with prison authorities. The executioner had already inspected the gallows the night before.
The convicts were escorted to the scaffold with their faces covered in black cloth and the executioner put the noose around the neck one by one. At the scheduled time, the jail superintendent waved his hand to signal the hangings, which were then conducted simultaneously.
A glimpse of the hangman At 1 am, Akshay wanted to meet Mukesh, but he was denied permission by the head warden. He caught a glimpse of the hangman, when he passed by and wanted to know about the new face roaming around. The head warden told him that he was just another prison staff.
Tihar Jail Director General Sandeep Goel confirmed that none of the death row convicts managed to sleep even as their lawyer was making last ditch efforts in the Supreme Court to save them somehow. Vinay had kept sittingin his cell.At 3.30 am the apex court gave the go ahead for their execution.
By then, paramilitary personnel were deployed outside the Tihar Jail complex in order to prevent any untoward incident, even as the four convicts prepared for their final journey from their cell to the execution platform, more than seven years after their heinous crime led to judicial reforms in India's rape laws.At 4 a.m., the assistant jailer asked all the four men to take bath and get ready, to which Vinay retorted, sources said.
At 4.15 a.m., they were granted time to read any religious scripture they wanted to. But all of them turned down the proposal.The four were then served their last breakfast.At around 4.30 a.m., they prepared to take the long walk to the hanging area.
The four convicts underwent a medical check-up, which established that they were fit to bear the punishment handed out to them. Meanwhile, the jail superintendent also checked for any letter or notice which could have prevented the execution, but no such document was received by the jail authorities.
At 5.20 a.m., with their faces covered with a cotton cloth and hands tied behind their backs, the four convicts were taken to the 'Phansi Kothi' (execution chamber), as the hanging area in Tihar Jail is commonly known. During this time, none of the other prisoners were allowed to leave their respective cells.The District Magistrate, Medical Examiner, Jail Superintendent and 10 other jail officials were present in the execution chamber.
At 5.25 a.m., a cotton cap with a flap was put on their faces just before they entered the gallows enclosures. Once inside the 'Phansi Kothi', the District Magistrate (DM) asked each of them for their final wish. Tihar sources said that none of the four convicts expressed any last wish.The DM then counter-signed the 'black' warrant.
The convicts were then mounted on the scaffold and placed directly under the beam to which the ropes were attached. They were now under executioner Pawan's watch, who strapped their legs tightly together and adjusted the rope around their necks.
"The Superintendent then gave the signal and the executioner pushed the lever to release the trap-door," a Tihar source said.After the execution, the bodies of the four men remained suspended for half-an-hour and were taken down at 6 a.m. after the doctor present announced that "life is extinct".
---Agencies