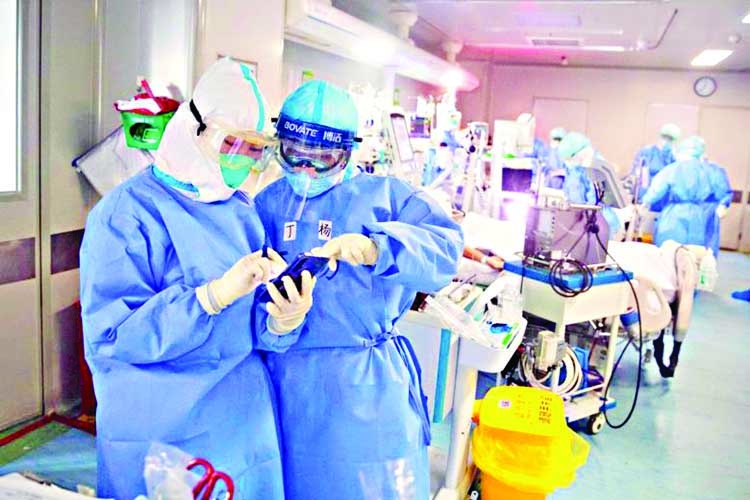 China's coronavirus infections from abroad hit a new daily record while infected travellers reached an unprecedented number of Chinese provinces, pressuring the authorities to hold the bar high on already tough customs rules and public-health protocols.
For a second day in a row, China found no domestically transmitted cases of the virus, which is believed to have emerged in a central province late last year, according to new daily figures on the disease, registered on Thursday.
Now the focus is on guarding against cases arriving from abroad as the spread of the coronavirus in Europe and North America sparks a rush home by Chinese expatriates, many of them students, raising fears of a second wave of infections just as China brings its epidemic under control.
Mainland China had 39 new confirmed cases on Thursday, the National Health Commission said, all of them imported.  Of the new imported infections, 14 were found in Guangdong, eight in Shanghai and six in Beijing, the health authority said in a statement.
Big transport hubs like the capital, Shanghai, Guangdong, including the city Shenzhen, near Hong Kong, have been the main points of entry for the infected travellers.
But on Thursday (March 19), imported cases were also reported in the cities of Tianjin, Liaoning, Heilongjiang, Shandong and Gansu in the north, as well as in Zhejiang, Fujian, Guangxi, Sichuan, bringing the total number of imported infections in China to 228.
The commission did not say where the cases were believed to have originated but provincial authorities said some of the travellers had been in Britain, the United States and Spain.
The new imported case in Tianjin, a city of 11 million people, was a 23-year old woman studying in London who travelled home via Zurich, Tokyo and Beijing, the Xinhua state news agency said.
The northeastern city of Shenyang said a traveller arriving from London, via Seoul, was its first imported case. It said the traveller did not show any fever or respiratory tract symptoms after arriving at Shenyang's airport on March 16.
The Yale School of Public Health said in a study many overseas outbreaks were caused by travellers from China who were pre-symptomatic and therefore not screened or isolated.
To limit the possibility of asymptomatic patients returning to spread the disease, authorities in a growing number of Chinese regions are making travellers coming back from any of 24 countries badly hit by outbreaks spend 14 days in isolation, either at home or at designated venue.
President Xi Jinping warned on Wednesday (March 19) that China must not allow the improving trend of containment of the virus be reversed.Wuhan, capital of the central province of Hubei and the epicentre of the outbreak, saw no new cases for a second day, the National Health Commission said.

That brings the total number of confirmed cases in mainland China to 80,967. The death toll from the outbreak had reached 3,248 as of the end of Thursday, up by three from the previous day.  Globally, 245,000 people have been infected and more than 10,000 have died.
---Reuters