A conversation with Marina Carr 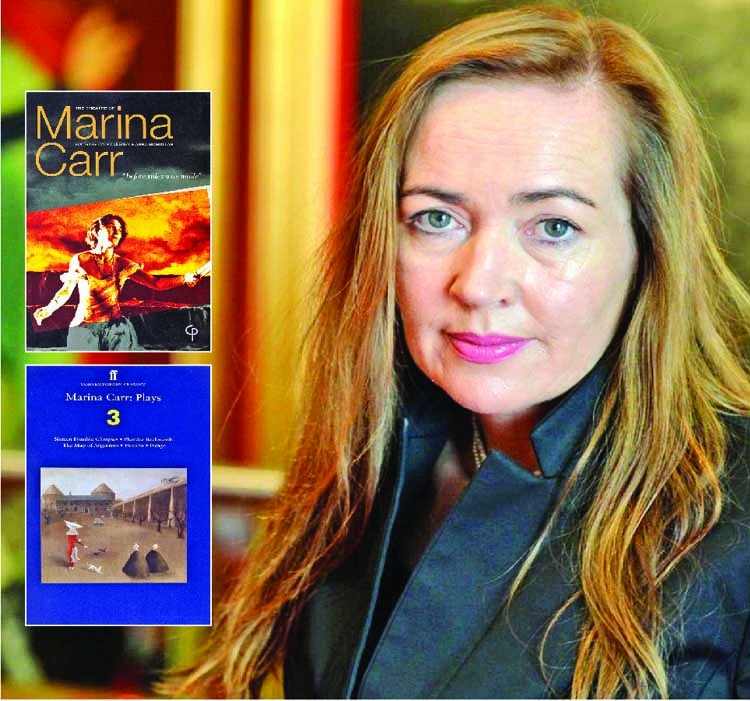 Interview by Paul Eberwine
Question: To start off, do you consider your works tragedies? What meaning do you attach to that word?
Answer: I love tragedy. I love the arc of it - that you can see the arc of a life.  I think all our destinies are very tragic if you think about where we're going.

Q: Do you think tragedy has any special significance for our time?
A: The tragic impulse is strange - to have a tragic outlook on the world. So I do think it is, in that sense of it. You know, [the conflict between] who we think we are, and who we actually are. How big and little our lives can be. That's the thing about tragedy - it magnifies human experience. You get to see life as something bigger, with more grandeur, more terror. That's the blueprint. I do also love comedy.
Patrick Cavenau, one of our great Irish poets, said tragedy is merely underdeveloped comedy, which I think is really interesting. It's fascinating, the Greeks would have their three tragedies and then they'd have their [comic] satyr plays, which don't say anything about the previous three plays. It's interesting, how they go together.
I think some of my plays are tragic, some of them are not. I mean, how can you define tragedy in a very materialistic sense? You know, when you take the gods out of it, it takes a lot of dignity out of human experience - it's just us, then. Just animals, whatever. It just seems to diminish it. It removes the yardstick. All sorts of things come into it. Teleology - do you believe that we're getting better? Are we getting worse? Tragedy raises these questions.

Q: Many have noted the influence of Greek tragedy on your work. In a previous interview, you express your opinion that the Greeks wrote "fantastic women." Can you explain what you mean by this?
A: Well, they're very powerful women. They took agency for themselves, it wasn't given to them. Fantastic orators. They were great outsiders - if you look at Clytemnestra and Sparta, at the time these plays were being written, the Greeks hated Sparta, hated Agamemnon. And you can see that in the writing - of course, the Spartans would bring down the state. So what was happening historically at the time had a big impact on how these women were written. I think the women are deeply transgressive. I think in many ways, you can look at Greek tragedy as salutary tales for how not to be a woman.
The fact that they are all outsiders - Phaedra, Clytemnestra, Medea. At the time, [the Greeks] were trying to start the polis and get state institutions going, and I think one of the big concerns was controlling the women. So I think all of that is in the plays, and yet you might say that the three great tragedians, Aeschylus, Sophocles, Euripides, strangely enough, were probably the first feminist writers. They have such a rigor around how they portray the women.
There's also the irony that at the time, the women probably wouldn't have been at these plays. Theater was for the boys and the men. If you were a visiting foreign dignitary, you would attend, but all their wives were at home … I find that the women are what you remember from these plays, aren't they? In the "Oresteia" and the Theban plays, that would be my focus now. That may change, maybe it's because I'm looking for it, but the women are [very memorable] in these plays, how they speak, how they behave …

Q: Do you see your protagonists, tragic as they are, as heroines?
A: No. No, I'm not sure what a heroine or a hero is. Maybe I have kind of a comic-book idea of it - someone who gets the girl and lives happily ever after. My characters certainly don't do that. I think heroes and heroines have become diminished, certainly in my eyes. The characters I write are deeply flawed. I don't intend to make them that way, I just think it happens. The reality is that we are flawed.

Q: Thinking more generally about literary tradition, why does ancient literature matter to you? Do you feel that it guides your writing, or does it present a sort of challenge to overcome?
A: I think it's a huge challenge. I think it's impossible to avoid, actually. I think it gives a fantastic architecture, if you're tapping into myth, which is really our unconscious, the stories of our race. We all know them. Whether we know them or not, they're in our bloodstream, our hardwiring. Giving character, weight and density to what I'm trying to say. Sometimes you're just not ready for it - they're so far ahead of what you're capable of that you're just tampering with them. But sometimes you hit on something that taps into the here and now.

Q: In your plays, memory and trauma from the past often determines the course of the present. Does the way ancient tragedies recur in your work have to do with this?
A: Probably!
Q: Many of your plays offer detailed expositions of grief, trauma, and the work of mourning. What role do you think art has to play in this sphere?
A: I'm always quoting this guy [Darien Leader] who wrote a book called "The New Black" about depression and grief. To paraphrase, the gist of what he says is that the function of art, if it has a function at all, is to allow us to grieve. That completely ties into the whole pity and terror thing. You go to watch something, and you have that moment of catharsis where you have the experience of the actor on stage, and the emotions fall away. So you don't have to go home and kill your father and marry your mother, but in a way you have, in your heart and soul, because you've lived through it. It's one of those things.
I would never claim to understand what catharsis is, and I have huge difficulty with the term. But it seems that it exists, that it happens. So, grief … they say about the Irish, or they used to, that all their wars are merry and all their songs are sad. I think there is such grief in living. What do you do about that? Do you allow for it?
It's very interesting to watch culture and rituals around death - what different cultures do with their dead. How they mourn. In England, if you die, you go into a fridge for a couple weeks until all the paperwork is sorted. You're taken to a funeral home, and your coffin's in a queue.
You've got half an hour when you get your turn in the little room with the incinerator and the coffin. People say their goodbyes, the coffin goes in, you're ushered out this way, and the next wave of mourners are coming in with their coffin. It's like being at the dentist. In Ireland - it's changing, but if someone dies, you wake them, in your sitting room or kitchen.
The family sits around, smokes, drinks, fights, plays cards, sings, with the body there. That's changing at home. There are now funeral parlors there, with crematoria. So that's beginning to happen. There are all these rituals about how you deal with the loss of someone you love, or didn't love, but are connected to. How you deal with someone who dies.
I'm sure it's so different in America because there's so many cultures here, but I think it's very telling, how a culture deals with their dead. In Ireland they used to have these professional keeners to come and grieve at your funeral. They were professional singers, there's still a few of them left. You would pay them to come. You'd have the body laid out, then the foot chorus at the feet, the head chorus at the top, and the two side choruses.
They'd wail. You'd pay them, but the grief was genuine. It's ritualized. There's stories further back that they used to take the body out of the coffin and pass it around the family members to say goodbye. I always found that so powerful - that connection. I don't know what you can make of that. But going back to Darien Leader, if art has a function, it's certainly to allow people to feel, to grieve. Otherwise, what are we here for? What does anything matter if we can't connect like that?

Q: Last question: any advice for aspiring writers?
A: Writers write! Get to work!


Paul Eberwine is a contributing reporter.
The interview appeared in yaledailynews.com