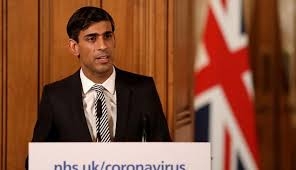 The government will pay the wages of employees unable to work due to the coronavirus pandemic, in a radical move aimed at protecting people's jobs.
It will pay 80% of salary for staff who are kept on by their employer, covering wages of up to £2,500 a month.
The "unprecedented" measures will stop workers being laid off due to the crisis, chancellor Rishi Sunak said.
Firms have warned the virus could see them collapse, wiping out thousands of jobs, as life in the UK is put on hold.
Mr Sunak said closing pubs and restaurants would have a "significant impact" on businesses.
It is understood that the wage subsidy will apply to firms where bosses have already had to lay off workers due to the coronavirus, as long as they are brought back into the workforce and instead granted a leave of absence.
The chancellor said the move would mean workers should be able to keep their jobs, even if their employer could not afford to pay them.
He said they were "unprecedented measures for unprecedented times."
"I know that people are worried about losing their jobs, about not being able to pay the rent or mortgage, about not having enough set by for food and bills... to all those at home right now, anxious about the days ahead, I say this: you will not face this alone," Mr Sunak added
The wages cover, which relates to gross pay, will be backdated to the start of March and last for three months, but Mr Sunak said he would extend the scheme for longer "if necessary".
The scheme, which will be run by HMRC, is expected to make the first grants to businesses "within weeks", a Treasury spokeswoman said.
'Hugely welcome'
Employers' body the CBI said Mr Sunak's announcement was "a landmark package".
"It marks the start of the UK's economic fightback - an unparalleled joint effort by enterprise and government to help our country emerge from this crisis with the minimum possible damage," said director general Carolyn Fairbairn.
The Resolution Foundation think tank also said the package was "hugely welcome", reaching lower-paid workers that were most at risk of job losses.
But other lobby groups warned of the potential risk to firms which had to wait for the money to arrive.
Kate Nicholls, the chief executive of trade body UK Hospitality, said many businesses faced rent payments before the support was due.
"Banks and landlords need to do more to help us bridge the gap towards this generous government support. Damage is being done now, so we need help now."
The Federation of Small Businesses also warned the delay in wages help - potentially until the end of April - meant many small firms would still face "an immediate, potentially terminal cash flow crunch".
'Not alone'
The government has faced huge pressure to intervene to support workers to prevent mass unemployment as anti-virus measures have seen many firms' revenues evaporate almost overnight.
The wage package is the latest in a series of government moves aimed at easing the burden on businesses and their employees.
However, there was not the same wages guarantee for the self-employed. Instead, Mr Sunak increased benefits that many will have to fall back on.
Other measures to support firms and workers included:
Capital Economics said that it expected the unemployment rate to rise from just under 4% to about 6% due to the crisis. However, without this latest government intervention, that rate would have risen to the financial crisis level of 8%, it said.