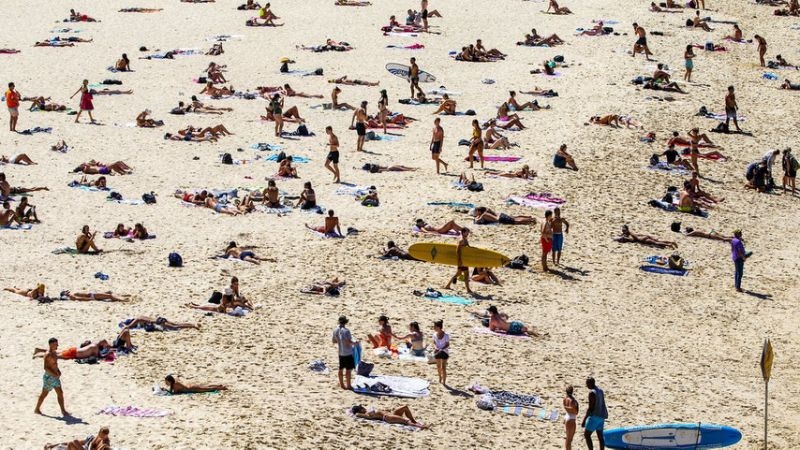 Police in Sydney have closed Bondi Beach after crowds exceeded Australia's outdoor gathering limit.
The country has banned outdoor gatherings of more than 500 people in a bid to tackle the spread of coronavirus.
However large crowds of people are still flocking to beaches across Sydney, flouting advice to stay inside.
Images from Bondi Beach on Friday showed swimmers, surfers and sunbathers packed in huge numbers onto the sand.
Police temporarily closed the beach on Saturday. It is not clear when it will reopen to the public.
New South Wales (NSW) Police Minister David Elliott said in a televised news conference that lifeguards would conduct a head count of the number of people on the beach.
If numbers exceed 500, the beach will be closed and people will be moved on. If anyone refuses to move, the police will be brought in.
Health Minister Greg Hunt said the beachgoers' behaviour was "unacceptable" and called on local councils to step in to ensure people are complying with the social distancing advice. Under the advice, people should try to stay 1.5m (4 ft 10 in) apart.
Mr Elliott warned that other beaches could take similar action if people failed to comply with the regulations.
He told ABC News: "Some of the photos that I saw from this very beach, of dozens of families using communal showers and toilets is in complete denial of what this virus is all about."
NSW Labor's Shadow Treasurer, Walt Secord, urged the government to consider closing the beach completely.
"The decisions we make today can be life and death decisions for other people in a few days. People are ignoring the social-distancing guidelines and I just think it's absolutely ludicrous."
New rules on socialising were announced by Prime Minister Scott Morrison on Friday. Indoor venues such as bars and restaurants must have a density of no more than one person per four square metres (43 sq ft) of floor space.
The previous overall limit of 100 people indoors and 500 people outdoors remain in place.
The number of coronavirus infections across Australia has risen to more than 1,000 and seven people have died.