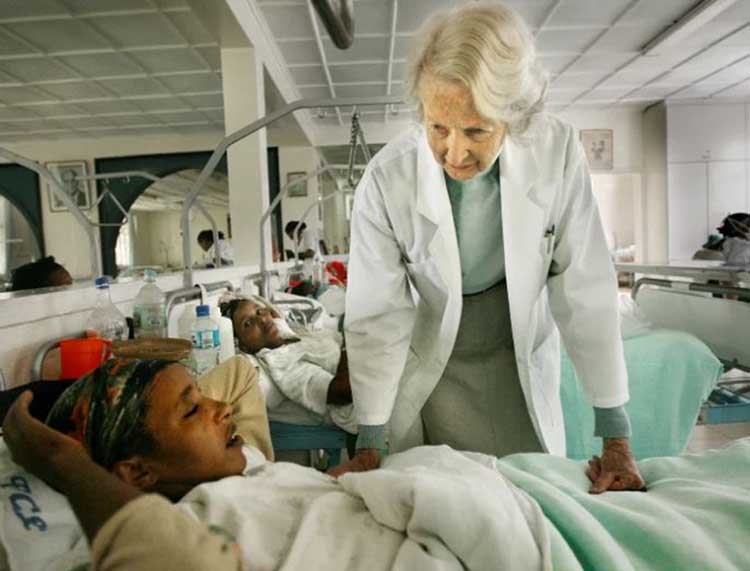 World-renowned Sydney gynecologists Dr Catherine Hamlin died at her home in Addis Ababa, Ethiopia. She was 96. Dr Hamlin, together with her husband the late Dr Reg Hamlin, established treatment centres for women suffering from the debilitating effects of obstetric fistula, a crippling condition that results from complications in childbirth almost unknown in the West. Over the past 61 years, more than 60,000 Ethiopian women have received the life-changing reconstructive surgery for obstetric fistula, thanks to the Hamlins' dedication.
Qantas will ground all its international flights and temporarily stand down two-thirds of its 30,000 staff until the end of May. The cutbacks, announced this morning, come as Australia's biggest airline reels from a massive downturn in travel due to coronavirus. Qantas international flights will be suspended from the end of March until May and domestic services will be cut by 60 per cent. More than 150 aircraft will be temporarily grounded, including all Qantas' A380s, 747s and 787-9s, and Jetstar's 787-8 fleet. About 20,000 Qantas and Jetstar staff will be stood down during that time. Qantas said in a statement to the ASX this morning the decision was made to "preserve as many jobs as possible longer term".
An immigration guard working at a Brisbane hotel being used as a makeshift detention centre has tested positive for coronavirus, prompting fears the confined refugee population could be vulnerable to an outbreak. The hotel, at Kangaroo Point in inner Brisbane, is used by Australian Border Force to house refugees brought to Australia from offshore detention, mostly to receive specialist medical treatment. Guardian Australia reported last year concerns that conditions were inhospitable, cramped and dirty.
Up to 40 stations on the London Underground network are to be shut as the city attempts to reduce the effect of the coronavirus outbreak. Transport for London (TfL) announced there would be a partial shutdown of the network from Thursday morning. Additionally, there will be no night Tube and bus services will also be reduced, TfL said. It comes after Boris Johnson said the virus was spreading faster in London than other parts of the UK . Latest government figures show there have been more than 900 confirmed cases of coronavirus in London and 34 people have died in the city as a result of the disease. Earlier this week Prime Minister Boris Johnson urged people to work from home and to avoid bars, pubs and restaurants.