US on top as outbreak shuts largest cities: Trump 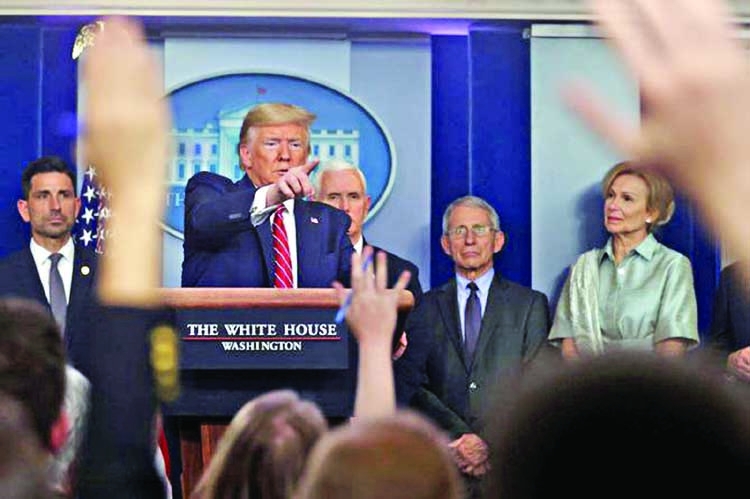 US President Donald Trump leads the daily coronavirus task force briefing at the White House in Washington, DC on Friday. -AFP
New York and Illinois followed California Friday in locking down to stem the coronavirus pandemic as President Donald Trump declared the United States was already "winning" the war despite a rapid rise in confirmed cases and deaths.
The move effectively seals off America's largest cities New York, Los Angeles and Chicago with the states of New Jersey and Connecticut also following suit. But Trump insisted there was no need for a national lockdown, arguing that other parts of the US weren't hurting as much as its most populous states.
Governor Andrew Cuomo ordered non-essential businesses to close and banned gatherings in New York state, a day after his counterpart Gavin Newsom told California's 40 million residents to stay home."We're all in quarantine now," Cuomo told reporters, warning of civil fines and mandatory closures for anyone violating the order, which takes effect on Sunday evening.
The escalation came as COVID-19-linked deaths in the US rose to 249 more than doubling in three days with more than 19,000 confirmed infections, according to a tally by Johns Hopkins University.  Among the new cases was a staffer in the office of Vice President Mike Pence, the pointman for Washington's response to the coronavirus outbreak.

"Neither President Trump nor Vice President Pence had close contact with the individual," Pence's press secretary Katie Miller said of the latest confirmed case to brush the inner circle of US leadership.Despite the surge in cases, Trump said the world's number one power was "winning" and "going to win this war."
"Those are really two hotbeds. Those are probably the two hottest of them all in terms of hotspots," Trump told the daily White House news conference, adding that states in the American Midwest were not registering as many confirmed cases.
"So no, we're working with the governors and I don't think we'll ever find that necessary," he added.But shortly afterwards Illinois Governor J.B Pritzker announced an immediate stay-at-home order for the state "to avoid the loss of potentially tens of thousands of lives."
"The only strategy available to us to limit the increase in cases... is to mitigate the spread of coronavirus in the most robust manner possible," he said.
The order is in place from Saturday evening until April 7, Pritzker added.The head of the US Army Corps of Engineers, Todd Semonite, said the agency was working on refitting more than 10,000 hotel and dormitory rooms in New York into temporary hospitals to alleviate the burden on health centers."We would like to think we can do this in three or four weeks and try to go as fast as we can," he said.
The number of confirmed infections in New York state jumped past 8,000 Friday, largely because of an increase in testing, as Cuomo announced he would pass an executive order mandating that only essential businesses can remain open from late Sunday.
He stressed that essential services included grocery stores, pharmacies and food delivery.Cuomo said "non-essential gatherings of individuals of any size" were canceled."New York state (is) on pause," he said.
"These actions will cause disruption. They will cause much unhappiness. I understand that," Cuomo added.He dismissed references to the measures as "shelter-in-place," which they have been called in California, but the rules effectively amount to the same thing.
California's statewide directive, which went into force Thursday evening, also instructs residents to remain at home unless necessary.It allows gas stations, pharmacies, banks and laundry services to remain open while restaurants can still provide take-out and delivery.
"They are taking strong steps. I applaud them," Trump said, referring to Cuomo and Newsom.Trump also announced Friday that the United States and Mexico have agreed to restrict non-essential travel across their border beginning on Saturday.
He said the move, similar to one already announced with northern neighbor Canada, was necessary to prevent spreading coronavirus "to our border agents, migrants and to the public at large."On Capitol Hill, US senators were negotiating over a $1 trillion emergency stimulus package.
The version unveiled late Thursday includes onetime "recovery rebates" of up to $1,200 for adults earning under $99,000 annually, and hundreds of billions of dollars in loan guarantees to industries hard hit by the crises including airlines and small businesses.
Wall Street stocks finished a volatile session much lower Friday, with the Dow down 4.6 percent, bringing the market's worst week since 2008 to a grim conclusion.
---AFP, New York