Bhuvneshwar reveals why he upped his pace 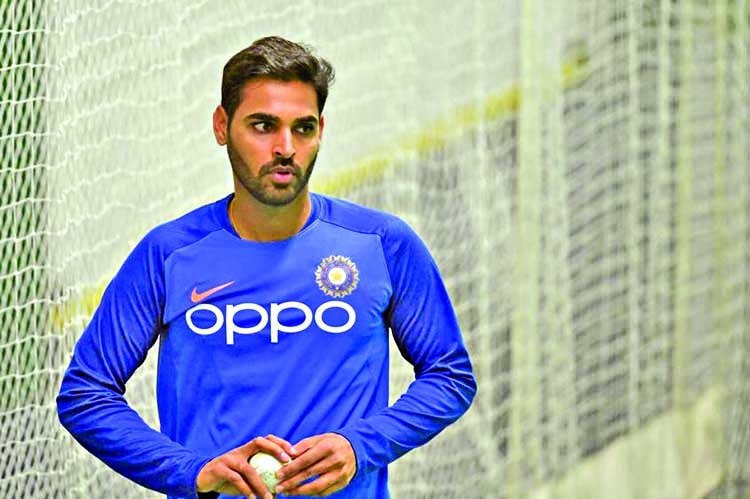 Indian pacer Bhuvneshwar Kumar increased his pace after recognising that swing alone couldn't guarantee him sustained success. -ICC
When Bhuvneshwar Kumar burst onto the international scene, it was mostly on the merit of his ability to swing the ball, but he soon realised the need to ally movement with extra pace to ensure sustained success.
Bhuvneshwar said that in his initial years as a domestic and international cricketer, he was able to achieve success with his ability to make the ball swing prodigiously. But he soon found that batsmen were becoming accustomed to his style of bowling and were able to counter him due to his lack of pace.
"When I arrived, I could swing the ball because I played the Ranji Trophy with the red SG ball, [which] is known for its tendency to swing," Bhuvneshwar said, "So I had become used to it.
The first year was very good as my swing earned me plenty of wickets, but eventually, because I didn't have too much pace, batsmen were able to adjust. Then I started getting hit for runs."At some stage, you realise you need to change something, and I felt I needed to increase my pace."
But the move to add pace to his repertoire wasn't a straightforward one as he temporarily suffered a loss of rhythm and, for a while, struggled to find his swing."I didn't have that rhythm in my bowling and things weren't going well. But then I began training and that helped me. Unknowingly, my pace increased," he explained.
"I struggled for one or two series because I wasn't used to bowling at that pace. So the ball wouldn't swing. Because I wasn't used to it, the body felt an extra load and I had to deal with a few injuries and niggles. But in the time off, I began to figure things out in terms of what was happening and how I could come back from it."