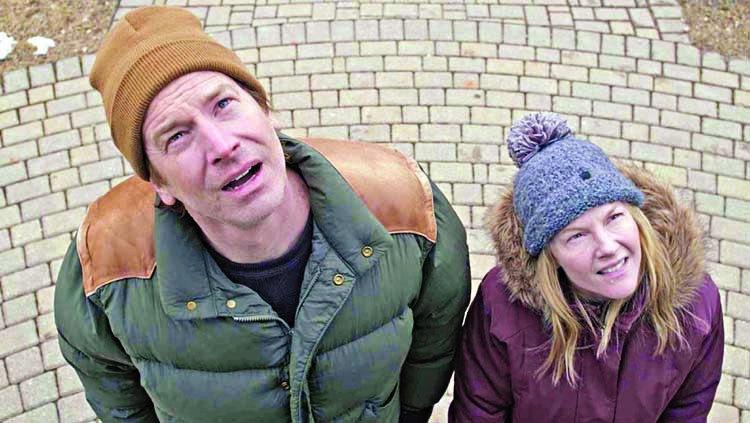 Frank Scheck
Rachael Harris and Rob Huebel star in Amber McGinnis' dramedy about the friendship that develops between a depressed stand-up comic and the Minnesota woman who aspires to perform comedy herself.
Two people, each unhappy with their lives, meet and form an unlikely emotional connection. It's a time-honored narrative formula, but Amber McGinnis' debut feature employs it to uncommonly moving and funny effect. Set in its titular small Minnesota town (population 6,424, according to a road sign), International Falls represents a strong showcase for its tyro director, screenwriter Thomas Ward and co-stars Rachael Harris (Lucifer, Suits) and Rob Huebel (Children's Hospital, Transparent).
Both lead performers have strong comedy backgrounds, which comes in handy for this dramedy about the burgeoning relationship between Tim (Huebel), a burnt-out, depressed stand-up comic perpetually on the road, and Dee (Harris), the unhappily married front desk receptionist whom he meets when he shows up for his latest dead-end gig at a hotel lounge.
Tim has no illusions about his talents or lack thereof, freely telling anyone within listening distance what a mediocre comic he is. Indeed, the jokes he cracks upon arriving at the hotel aren't wildly funny. Nonetheless, he intrigues Dee, a married mother of two who secretly harbors ambitions of being a stand-up comic herself and has recently learned that her husband is cheating on her.
After watching Tim's uninspired set that night, a drunken Dee reintroduces herself to him. A similarly listless and awkward sexual encounter ensues (a hand job has never seemed so mechanical), but it nonetheless sparks a friendship between the two. The next day, she shows him around the town, pointing out its minor landmarks (a giant-sized statue of Smokey the Bear being the highlight) and Canada, located just across the river. The culture clashing that ensues provides the pic with some of its funniest moments.
Although the film pokes some fun at its real-life setting, mainly through Tim's wisecracks, it doesn't condescend to the town, which he sarcastically compares to "a beautiful little Christmas village," or its heavily accented denizens. That's typical of the intelligence of Ward's screenplay, based on his own two-character play. While one can easily imagine a version of the piece onstage, it never feels claustrophobic.
The alternately funny and poignant character-revealing dialogue flows naturally in the expert hands of Harris and Huebel, who leaven their comedic performances with strong layers of pathos. Similarly, the relationship that develops between their two very different, vulnerable characters feels real, making us feel invested in their fates.
Nor does the movie treat its supporting characters with anything less than dignity, including Dee's pornography-obsessed husband (Matthew Glave), a loquacious liquor store salesclerk (Mindy Sterling) and a local sheriff (Kevin Nealon, largely playing it straight in a cameo turn). Perhaps the sole misstep is a sequence, accompanied by spaghetti Western-style music, in which Dee fantasizes about gunning down her husband's lover. It feels jarringly out of place in this effort otherwise grounded in quiet naturalism.
International Falls takes an unexpected dark turn, although managing to end on an uplifting note. Director McGinnis, making her feature debut, does an excellent job handling the script's subtle tonal shifts. She's also elicited sterling performances from Huebel and Harris, the latter particularly moving as the wry Dee who discovers an inner strength she didn't know she had. When she happily grins while having a triumphant moment at the film's conclusion, you can't help rooting her on.