'Trolls World Tour': You will want to rock and troll 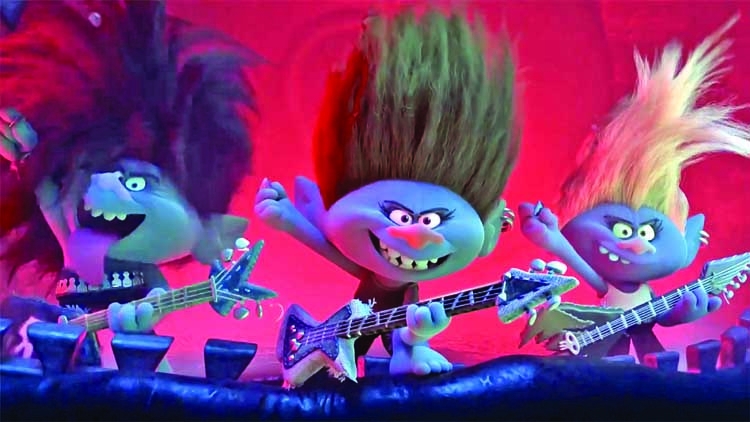 Terence Toh
In the past, trolls were often portrayed as repulsive, anti-social monsters. They lived under bridges, causing trouble to people who passed by. Today, however, things have changed. They are now considered to be repulsive, anti-social people who live in dank basements, causing trouble to people on the Internet. Oddly, these modern trolls are probably more disliked than their ancient ancestors!
Trolls have always had a bad reputation. So it almost feels as if Dreamworks' Trolls movies is an attempt to fix this terrible PR. Sort of like what Twilight films did to vampires.
The trolls here are cheerful and loving; they enjoy singing songs and hugging. Whether this will make you love or hate trolls more is debatable: thankfully, watching these trolls in action can be quite entertaining.
Trolls World Tour is the sequel to 2016's Trolls, an animated movie based on the troll dolls toy series of the 1970s and 1980s. You know, those little plastic figures with the really long hair.
The sequel continues with the adventures of Poppy (voice of Anna Kendrick) and Branch (Justin Timberlake), two trolls who live in a village with their friends.
In this movie, Poppy is now Queen Poppy, ruler of their village. She learns, however, their world is much bigger than they imagine. There are in fact six troll kingdoms, each based on a genre of music. Poppy is a Pop Troll (no surprise) and there are Rock, Funk, Classical, Techno and Country trolls, as well as other smaller musical groups out there. (Yes, K-pop trolls exist, and yes, they do make an appearance! One wonders if there are dangdut or dikir barat trolls as well.)
Long ago, the six kingdoms lived in harmony. But everything changed when the Rock Trolls attacked. Only the Avatar... sorry, Queen Poppy, can stop this, by confronting Queen Barb (Rachel Bloom), who wants to suppress all other types of music and ensure Rock's dominance. Poppy, Branch and their friends go off on an epic quest to stop them.
Trolls World Tour is bright, breezy and more colourful than an explosion in a Smarties factory. The plot bounces along with an almost manic energy, with silly jokes and whimsical characters popping up all the time. A scene with a "smooth jazz" troll must be seen to be believed.
Children are going to absolutely adore this. If you're an older watcher, however, don't despair: thankfully, there's actually a lot in this film to like. First of all, the show boasts a stunning voice cast (Kelly Clarkson! Mary J Blige! Ozzy Osbourne! Sam Rockwell!). Some of these stars only appear for a scene or two, but make the most of what they are given.
And the voice acting is pretty good. Kendrick and Timberlake play off each other well, and any time they sing is a highlight. The songs are also pretty fun: so many different troll kingdoms means many different styles of music here, which is great.
Queen Barb's version of Rock You Like A Hurricane is cool, while one of the movie's highlights is when Poppy and friends perform a medley of pop songs for the Country Trolls. Who by the way, are all portrayed as being half-horse. Because of course they are.
The show's writing also isn't bad: many of the jokes, while surreal, are actually quite funny. Its story explores musical appropriation (a theme you would never expect to see in a kid's movie!) and has a very timely message about diversity despite differences. Not all the jokes work, and some scenes are very cheesy, but that's to be expected for a movie of this nature.
The movie also wraps itself up quite nicely: a bit too nicely, actually. Some characters are let off a bit too easily for their evil deeds, and one very major issue (indeed, the issue that caused all the problems in the film to begin with!) is almost completely forgotten at the end. Maybe it will be addressed in a sequel? Probably not, given how overly cheery these movies are.
Overall, it's not a perfect film, but there's a lot to enjoy here. You'll probably have a lot of fun on this Trolls World Tour, especially if you are under 12. You might end up humming one of the songs on the soundtrack for a long time. Believe it: we're certainly not trolling you!