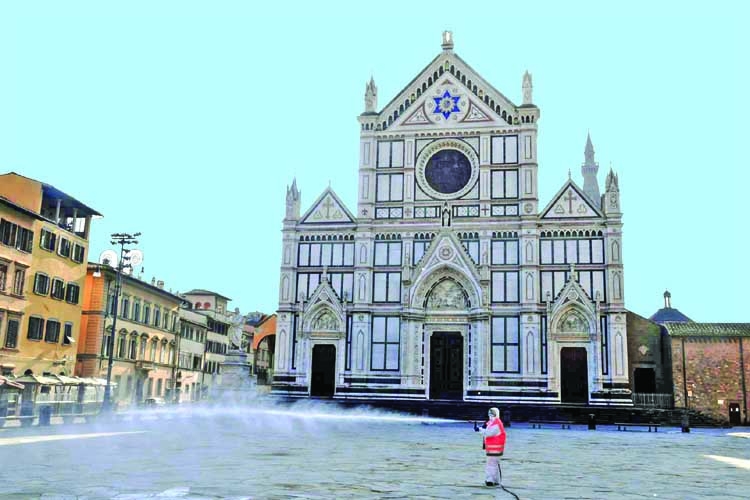 Italy on Saturday reported 793 new coronavirus deaths, a one-day record that saw the country's toll shoot up to 4,825 - 38.3 percent of the world's total.
The number of confirmed COVID-19 infections rose by 6,557 to 53,578. The total number of fatalities in the northern Lombardy regions around Milan surpassed 3,000.Northern Italy has been the hardest hit by the coronavirus outbreak. It accounts for nearly two-thirds of Italy's fatalities.
Italy has reported 1,420 deaths since Friday, a grim figure that suggests the pandemic may be breaking through the government's various containment and social distancing measures.
The Mediterranean nation of 60 million has been under an effective lockdown since March 12, when public gatherings were banned and most stores shuttered.In a bid to combat the outbreak, approximately three million masks were scheduled to arrive in Italy on Saturday.
Police were out in force across the streets of Rome on Saturday, checking documents and fining those outside without a valid reason, such as buying groceries. Joggers were asked to run around the block of their houses, parks and beaches were closed, and the government in Rome prepared to extend school and other closures into the summer months.
But the outbreak keeps gathering pace in the new global epicentre of a virus that was first reported in December in China and has since transformed the world, straining health care systems, upending lives for millions and pummelling stock markets globally.
The figures released Saturday showed deaths still largely contained to Italy's richer north, whose world-class healthcare system is creaking under the pressure of coronavirus patients.
But it is better that what is available in the poorer south, where some regions have registered a few dozen deaths - and which the government in Rome is watching closely.The Lazio region that includes Rome has recorded a total of 50 deaths and 1,190 infections.
How authorities are battling to keep Italians at homeThe rising death toll comes despite widespread efforts to lockdown the entire country. Italy announced 627 new deaths on Friday, as its number of fatalities went past that of China, where the virus originated.
Italy's government said on Friday it is considering even further restrictions on its already locked-down population as the country reels under the continued spread of the coronavirus.
"In the next 24 to 48 hours, new restrictions are possible," Italy's minister of regional affairs Francesco Boccia said Friday, citing the possibility of banning open-air activities.
The presidents of regions in the north - Italy's richest and the most devastated by the virus - have been pressing Prime Minister Giuseppe Conte to clamp down even harder on the movement of people, calling for the deployment of the army to help enforce the measures.
"Unfortunately, even today the statistics aren't going in the right direction, neither in terms of new infections or in terms of deaths," Lombardy's president Attilio Fontana told a press conference on Friday.
A list of requests by mayors throughout Lombardy would be submitted to Conte on Friday, he added.Fontana has asked Conte to close all private and public offices, other than essential ones, as well as construction sites, and to crack down harder on people who continue to flout the quarantine.
"I tried to convince him that we have to take more rigorous measures," Fontana told La7 television on Thursday, referring to a conversation with Conte."We can't joke around anymore."The government  imposed a nationwide lockdown on March 12 and had been hoping to see the first results after two weeks.
But civil protection service chief Angelo Borrelli said Friday it was premature to think about when infections might begin to plateau."There are reasons to think that it could be next week or the week after," Borrelli told reporters."But it is not a scientific fact."
Italy's death rate of 8.6 percent among those registered with infections is significantly higher than in most other countries.Medical experts have mainly attributed this to Italy's older than average population.The overwhelming majority of Italy's fatal cases involved elderly people with at least one pre-existing condition.
The National Health Institute (ISS) said Friday that the average age of Italy first 3,200 victims was 78.5.Almost 49 percent of them had three or more pre-existing conditions.Just 1.2 percent of those who died had no other ailments.
---AFP