'I no longer believe Mahathir Mohamad' 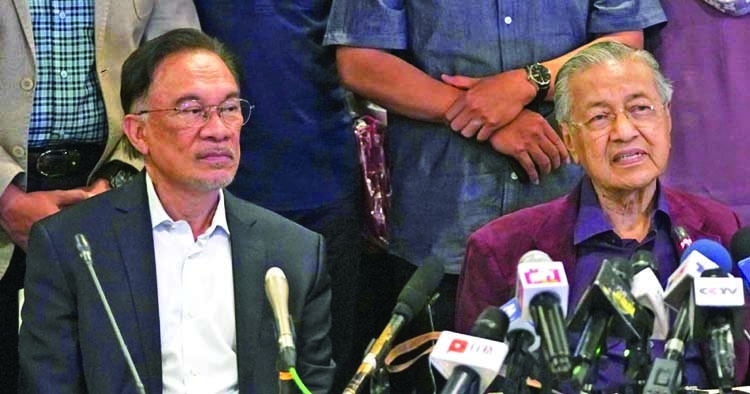 Malaysian Prime Minister Mahathir Mohamad talks to media next to his would-be successor Anwar Ibrahim in Putrajaya, Malaysia. -AP file photo
Malaysian opposition leader Anwar Ibrahim said he no longer believes former Prime Minister Mahathir Mohamad following a series of broken promises between the two political stalwarts. Anwar, in an interview with CNBC on Friday, said "not now" when asked if he still trusted in the former prime minister.
"I am just human, I take people at face value and I think people do change with age, with wisdom, but I am not necessary right always and, in this particular case, I apologize, I was wrong," he said. "No regrets."
Anwar, 72, waited in the wings for nearly two years for Dr Mahathir, 94, to fulfill a campaign pledge to eventually hand over the premiership to him.Dr Mahathir refused to commit to a timeline for the transition, which became moot when bickering among the ruling coalition led to its collapse last month, reports Bloomberg.
The conflict between Anwar and Dr Mahathir has dated way back to the 1990s, when Anwar served as Dr Mahathir's deputy and was seen as his successor. But Dr Mahathir fired Anwar in 1998, and then he spent the next six years in prison on convictions for abuse of power and sodomy.Anwar went back to jail again in 2015 on a subsequent sodomy charge.
Anwar said Dr Mahathir "seemed quite sincere", visiting him in jail and courthouse in the run-up to the 2018's national election.He added that Dr Mahathir asked him to work together and made "promises in private, and in public, signed documents".

The two leaders papered over their rivalry to oust former Prime Minister Najib Razak. After the 2018's election victory, Anwar received a royal pardon and was freed from jail.Anwar said he plans to "move on" and focus on the plight of the people, he told CNBC.
Malaysia's opposition will support any effective measures by the current government during the coronavirus epidemic, Anwar said, adding that he believes the administration led by Muhyiddin Yassin lacks clear plans to battle the outbreak.