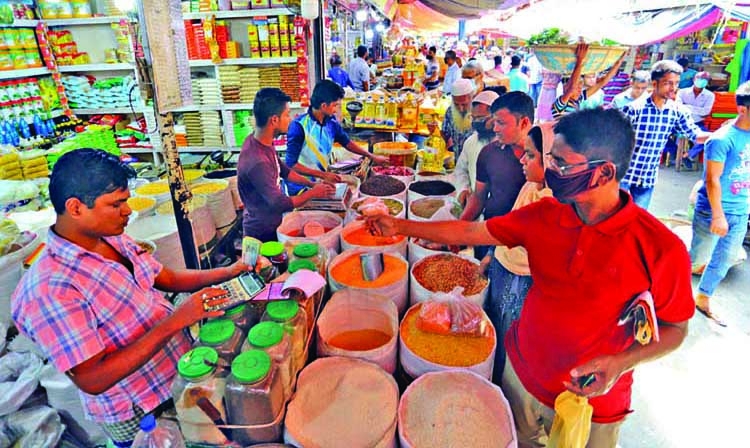 City dwellers thronged Karwan Bazar kitchen market to buy daily essentials over a panicked situation over coronavirus outbreak on Saturday. -Mostafizur Rahman/AA
Despite calls from different quarters of the government including Prime Minister Sheikh Hasina, panic-buying of daily commodities is going on massively igniting wholesale and retail markets in cities and towns.
Prime Minister Sheikh Hasian on Saturday assured that the country had enough food stock and was able to import a year worth of food for the whole nation.
Fearing lockdown caused by coronavirous outbreak, people are rushing to markets for daily commodities in order to stockpile these. Traders are cashing in on the momentum charging additional prices.
This correspondent visited different kitchen markets in the capital including Kawranbazar on Saturday and found the reality of panic-buying and skyrocketing prices of daily commodities.
At Kawranbazar, onions were selling at Tk 65 to 70 per kg which was almost half in the previous week. Potatoes were selling at Tk 28-30 per kg which was almost double compared to the previous week.
Prices of garlic, ginger, vegetables, fish and meat were also on the rise.Rice markets were also spiraled by at least 20 percent forcing mobile courts to hit different markets in the capital.
Mobile courts fined a good number of sellers for charging additional prices.According to the information of The Asian Age district correspondents, prices of daily commodities were on the rise due to panic-buying.