WHO for lockdown and emergency 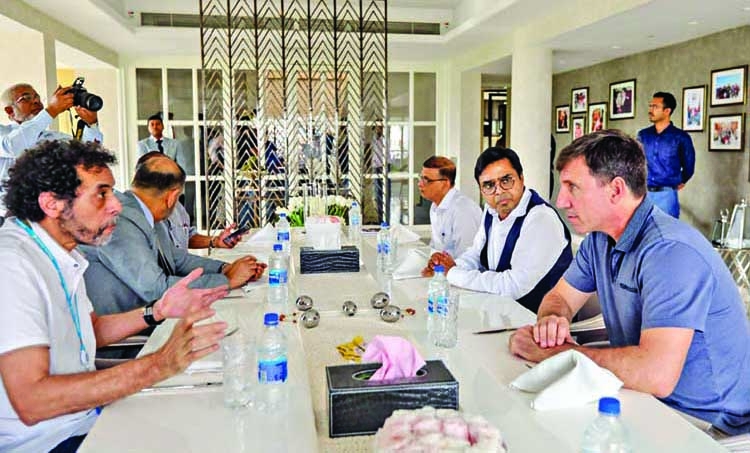 Mohammad Sayeed Khokon, the Mayor of Dhaka South City Corporation, talking to the representatives of WHO over coronavirus in the city on Saturday. -AA
With the increasing number of deaths and cases of infection caused by coronavirous, the World Health Organization (WHO) has suggested Bangladesh that some neighborhoods including parts of the capital Dhaka could be locked down. It has also suggested the authorities concerned to announce 'emergency' if the situation deteriorates.
Mohammad Sayeed Khokon, the Mayor of Dhaka South City Corporation disclosed the opinions while briefing reporters after a meeting with the representatives of WHO at his residence in the capital on Saturday.
WHO's residential representative in Dhaka Dr Bardan Jung Rana, public health emergency program chief Dr Hammam EI Sakka, US Center for Disease Control and Prevention (CDC) country director Dr Michael S Friedman and Prime Minister's personal physician Professor Dr ABM Abdullah, among others, attended the meeting.
Dr Bardan Jung Rana said, ''We can't take any decision to this end as it is a matter of the policy makers of the country. However, none of us is beyond risk. Everybody has to be careful. Not only the World Health Organization, but also other global health organizations will stand by Bangladesh.''
Professor ABM Abdullah said, ''The suggestions of lockdown and emergency have come forward against the backdrop of the situation. The government could follow the suggestions made by WHO for the betterment of the people.''

Mayor Sayeed Khokon said, ''We will pass the suggestions made by WHO to the higher authorities of the country. We have realized that coronavirus situation will worsen largely in the days to come and that is why all-out measures have to be exerted without any delay.''

Meanwhile, Bangladesh keeps experiencing the lashes of deadly coronavirus as it reported another death taking the number to two and four fresh cases of infection raising the number to 24. The latest victim is a 73-year-old.

Health Minister Zahid Maleque broke the news at a press briefing on Saturday at Directorate General of Health Services at Capital's Mohakhali and said, ''The elderly person was infected after coming into contact with an overseas-returnee. He was also suffering from a number of other health issues.''
''Of the four new cases, two are men and two are women,'' he added.He also said, ''We are working to prepare 100 ICU which will be increased to 400 gradually.''
''As many as 50 persons have been institutionally quarantined and more than 14 thousand overseas-returnees put on home quarantine.'' added the Health Minister.A 70-year-old man was the first COVID-19 victim in Bangladesh.
He got infected after coming into contact with a relative who returned home from abroad recently.Among the infected persons, three got released from hospital after making full recovery and 19 are undergoing treatment.
COVID-19 has so far killed at least 11,888 people across the world with more than 286, 000 cases of infection. Italy tops the list of deaths with 4,032 cases followed by China with 3,255.
Iran has so far recorded 1,556 casualties followed by Spain with 1,326. The deadly virus has taken the lives of 450 people in France followed by 276 in the USA. A total of 186 countries and territories have cases of coronavirus infection which was first broke out in Chinese city of Wuhan.