Imports of medical supplies plummet as demand in US soars 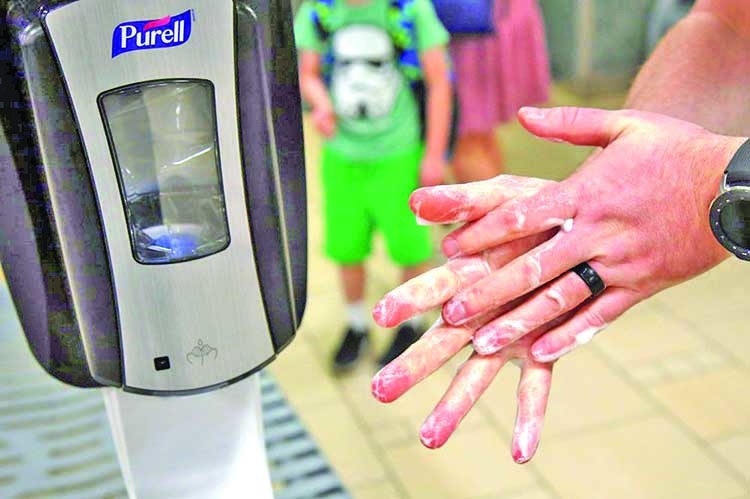 A traveler uses hand sanitizer from a dispenser at Sky Harbor Airport in Phoenix on March 17, 2020. -AP
The critical shortage of medical supplies across the US, including testing swabs, protective masks, surgical gowns and hand sanitizer, can be tied to a sudden drop in imports, mostly from China, The Associated Press has found.
Trade data shows the decline in shipments started in mid-February after the spiraling coronavirus outbreak in China led the country to shutter factories and disrupted ports.
Some emergency rooms, hospitals and clinics in the US have now run out of key medical supplies, while others are rationing personal protective equipment like gloves and masks.The United States counts on receiving the vast majority of its medical supplies from China, where the coronavirus has infected more than 80,000 people and killed more than 3,200.
When Chinese medical supply factories began coming back on line last month, their first priority was their own hospitals.The government required makers of N95 masks to sell all or part of their production internally instead of shipping masks to the U.S.
The most recent delivery of medical-grade N95 masks arrived from China about a month ago, on Feb. 19. And as few as 13 shipments of non-medical N95 masks have arrived in the past month - half as many as arrived the same month last year. N95 masks are used in industrial settings, as well as hospitals, and filter out 95% of all airborne particles, including ones too tiny to be blocked by regular masks.
Governors across the country are becoming panicked as states run out of equipment. President Donald Trump has urged them to buy masks on the open market, but few if any are available.
"Without adequate protection, more of our hospital staff could become ill, which would mean there wouldn't be people to care for patients," said Nancy Foster, the American Hospital Association's vice president of quality and patient safety policy.Some hospitals are down to just a day or two of personal protective equipment, she said.
The AP found that in the past month, hand sanitizer and swab imports both dropped by 40%, N95 mask imports were down 55%, and surgical gowns, typically sourced from China, were at near normal levels because the sourcing was shifted to Honduras.
Typically, medical supplies are delivered along both coasts. But almost all the supplies that did arrive in the past month came into Newark, New Jersey, across the country from the earliest and most severe coronavirus outbreaks.The AP identified the falling imports by looking at shipment data maintained by ImportGenius and Panjiva Inc., services that independently track global trade.
In mid-February, the World Health Organization warned that global demand for safety gear for medical providers was 100 times higher than normal. Prices were 20 times higher, stockpiles were depleted and there was a four- to six-month backlog. Despite this, federal contracting data shows there was no big effort at that point to submit orders.
Trade policies haven't helped. Tariffs on medical supplies made them more expensive, and they were only lifted March 5, even though health care associations asked the administration last year to exempt items like masks, gloves and gowns.
And now countries including South Korea, India and Taiwan are blocking exports of medical supplies to save them for their own citizens, leaving the US with fewer options."The lag time could be weeks. It could be upward of months," said Khatereh Calleja, CEO of the Healthcare Supply Chain Association.
Doctors, nurses and first responders in the US are resorting to spraying their masks with bleach at the end of each day and hanging them up at home to dry to use for another day, according to the American College of Emergency Physicians.
"There is a little bit of anxiety, as you can imagine, going to work and not knowing if you will have enough personal protective equipment," said Dr. David Tan, president of the National Association of EMS Physicians.
The decline in swabs included multiple varieties, not just ones needed to test for COVID-19. The Centers for Disease Control and Prevention has for weeks warned state and local health departments about shortages of swabs, which are needed for the testing that is critical to containing the pandemic.
Even over-the-counter medical shipments are decreasing. Ten shipping containers filled with medical thermometers arrived at US ports a year ago this month. But in the last 30 days, there were just five.
Hand sanitizer, also commonly sourced from China, has disappeared from US stores, and it may stay scarce. Last year by this time, 223 shipments had arrived. This year, since January, just 157 shipments have come.
The shortages affect patients because they can't get tested and their providers may be carrying the virus from one person to the next. But the far greater risk is to medical personnel: Already, there are reports of dozens of doctors, nurses and medical staff who have contracted the virus.
---AP