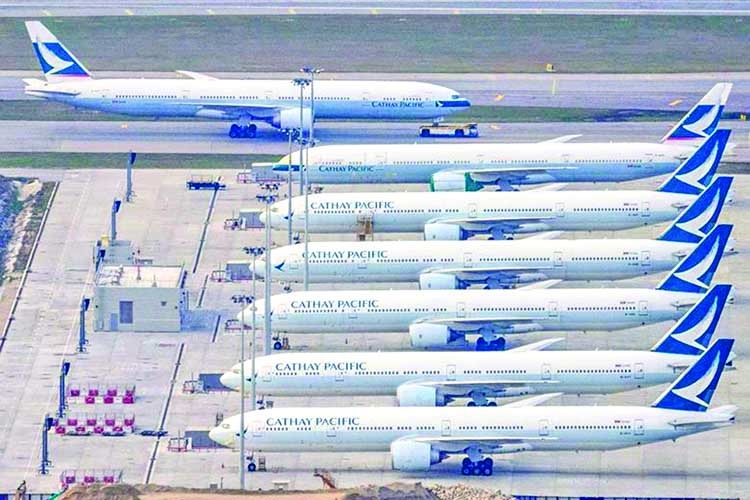 Cathay Pacific will operate three flights per week to 12 destinations. -AFP
Cathay Pacific Airways will slash passenger capacity by 96 per cent in April and May as the coronavirus shuts down travel across the world.
Cathay Pacific will operate three flights per week to 12 destinations: London, Los Angeles, Vancouver, Tokyo, Taipei, New Delhi, Bangkok, Jakarta, Manila, Ho Chi Minh City, Singapore and Sydney. Cathay Dragon will operate three flights a week to Beijing, Shanghai and Kuala Lumpur. "
We need to take difficult but decisive measures as the scale of the challenge facing the global aviation industry is unprecedented," Chief Customer and Commercial Officer Ronald Lam said in a statement. "Travel restrictions are making it increasingly difficult for our customers to travel and demand has dropped drastically."
The virus has floored Cathay, which was already reeling from the impact pro-democracy protests in Hong Kong had on visitor numbers for much of last year. The airline has already asked staff to take unpaid leave and warned that it faces a substantial loss in the first half of this year, with a HK$2 billion (S$373 million) loss in February alone. It also said it would operate a "bare skeleton" schedule for passenger flights in the coming months.
"Our ability to maintain even this skeleton schedule will depend on whether more travel restrictions are imposed by governments around the world which will further dampen passenger demand," the company said in its statement on Friday (Macth 20). Hong Kong Express, the budget carrier Cathay acquired last year, said earlier on Friday that it is temporarily shutting down all flight operations to save cash.
On some days in February, Cathay flight bookings fell to as low as 11,000-12,000 from the standard 90,000, Lam said earlier this month. Passenger load factor declined to about 50 per cent at the end of February - about a month after airlines began cutting operations because of the coronavirus - and year-on-year yield fell significantly.
The coronavirus has plunged the aviation industry into an unprecedented crisis, with Sydney-based CAPA Centre for Aviation warning that most carriers will go bankrupt by the end of May without government support.
The International Air Transport Association said the industry needs state aid and bailouts of as much as $200 billion to survive, while the Association of Asia Pacific Airlines said the region's carriers face revenue shortfalls of more than $60 billion this year.
Away from China, where the pandemic originated, major airlines have grounded thousands of planes and furloughed staff. Among those, Europe's biggest carrier Deutsche Lufthansa will idle 700 aircraft and 95 per cent of seats, shrinking its flight schedule to a level last seen in 1955, while American Airlines Group will park 450 aircraft.
---Bloomberg, Hong Kong