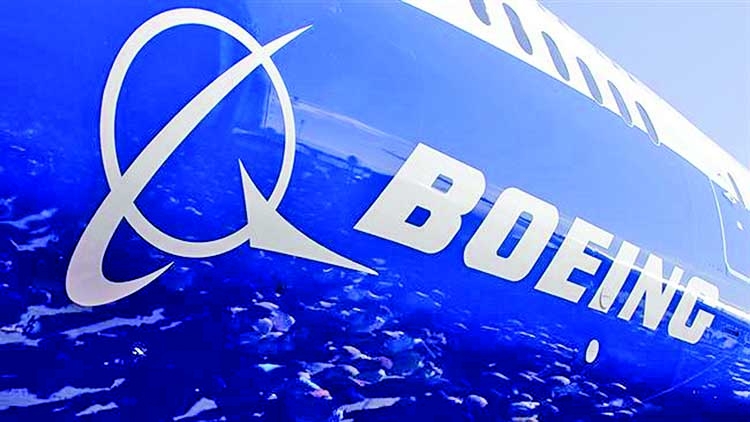 The Boeing logo is displayed on a screen, at the New York Stock Exchange (NYSE) in New York, US, August 7, 2019. -Reuters
Boeing Co (BA.N) will cancel CEO pay, suspend its dividend and extend a pause on share buybacks, the US plane maker said on Friday, as companies eager for government aid to curb fallout from the coronavirus face pressure to cut payouts to investors.
Boeing's decision echoes similar measures taken by the largest US airlines in an effort to win over taxpayer support for their requests for stimulus packages, as the fast-spreading virus virtually erases air travel demand and hits the global economy.
Boeing has said it wants at least $60 billion in US government loan guarantees for itself and to help prop up a US aerospace manufacturing supply chain already reeling from the year-old grounding of its previously fast-selling 737 MAX jetliner after fatal crashes.
"Boeing is drawing on all of its resources to sustain operations, support its workforce and customers, and maintain supply chain continuity through the COVID-19 crisis and for the long term," the company said late on Friday.Democrats and some Republicans have been insisting on limits on executive compensation, buybacks and dividends as part of any government assistance.
On Friday, US President Donald Trump said he would demand limits on any company receiving assistance."When we did a big tax cut, and when they took the money and did buybacks, that's not building a hangar, that's not buying aircraft, that is not doing the kind of things that I want them to do," Trump said.
"I am fine with restricting buybacks - in fact I would demand that there be no stock buybacks. I don't want them taking hundreds of millions of dollars and buying back their stock because that does nothing."
Boeing, which suspended its stock buyback program in April 2019 in the middle of the 737 MAX crisis, said it will extend its pause of any share repurchasing "until further notice."On Thursday, Boeing said former United Nations ambassador Nikki Haley had resigned from its board after opposing its bid for government financial assistance.
"I cannot support a move to lean on the federal government for a stimulus or bailout that prioritizes our company over others and relies on taxpayers to guarantee our financial position," Haley said in a letter to the company's management released by Boeing on Thursday.
---Reuters, Seattle