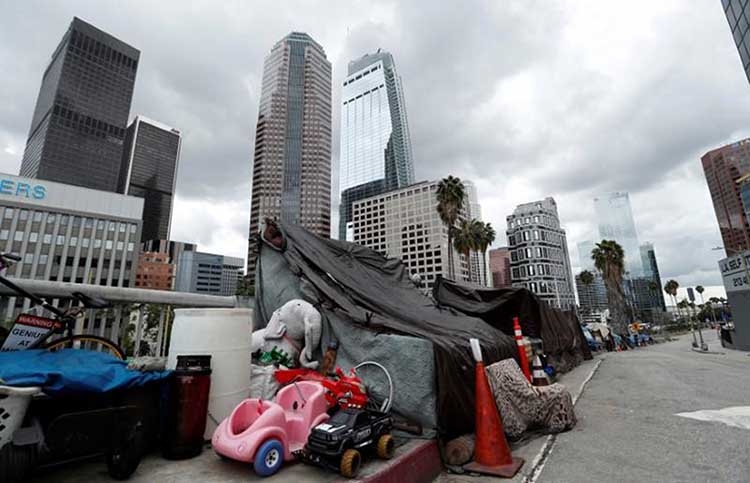 A homeless camp is pictured in the downtown area of Los Angeles after California's governor Gavin Newsom issued an unprecedented statewide "stay at home order" directing the state's 40 million residents to hunker down in their homes for the foreseeabl
uAA News Desk
New Jersey's governor was expected on Saturday to follow four other states - California, New York, Illinois and Connecticut - demanding that millions of Americans close up shop and stay home to slow the spread of coronavirus infections.
The sweeping state-by-state public health restrictions, unprecedented in breadth and scope, added to the distance being experienced among ordinary Americans even as the pandemic seemed to close in on the highest levels of power in the nation's capital.
An aide to U.S. Vice President Mike Pence, leading the White House task force formed to combat the outbreak, tested positive for the virus, but neither President Donald Trump nor Pence have had close contact with the individual, Pence's press secretary, Katie Miller, said in a statement on Friday.
Pence's office was notified of the positive test on Friday evening, and officials were seeking to determine who the staffer might have exposed, Miller said.
The aide was not publicly identified, and the vice president's office did not immediately respond to a request for further details of the diagnosis, the staffer's condition, or whether Pence would be tested.
The White House said last week that Pence did not require testing after dining with a Brazilian government official who later tested positive for the respiratory illness. President Donald Trump has tested negative for the virus, his doctor said last week.
Two members of the U.S. House of Representatives tested positive for on Wednesday, becoming the first members of Congress known to have contracted the disease, which has killed 266 people in the United States.
Click tmsnrt.rs/3dkIMIL for a GRAPHIC on U.S. cases. The total number of known U.S. coronavirus cases has risen exponentially in recent days, climbing past 18,000 in a surge that health officials attributed in large part to an increase in diagnostic testing.
Expanding on social-distancing measures increasingly adopted at the local level, California Governor Gavin Newsom instituted the first statewide directive requiring residents to remain indoors except for trips to grocery stores, pharmacies, gas stations and other "essential businesses."
Newsom's order, announced late on Thursday, made allowances for the state's 40 million people to briefly venture outside for exercise so long as they kept their distance from others.On Friday, his counterparts in New York state, Illinois and Connecticut followed suit, and New Jersey Governor Phil Murphy said he planned to issue similar directives on Saturday.
The five states where governors have banned or will soon ban non-essential businesses and press residents to stay inside are home to 84 million people combined, about a quarter of the entire U.S. population and account for nearly a third of the nation's economy.
---Reuters