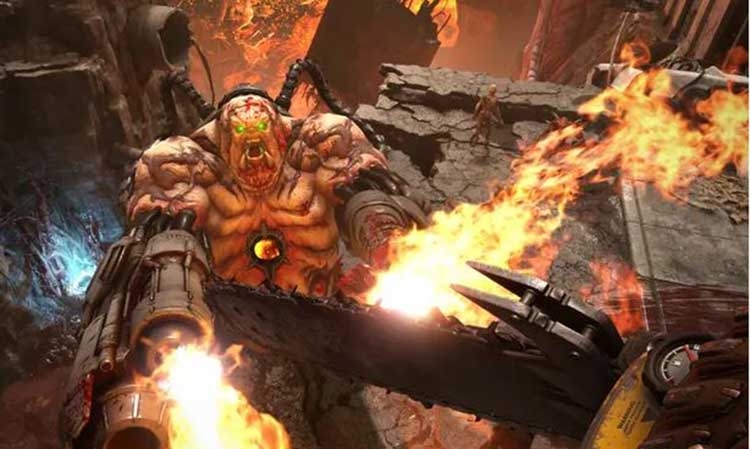 Picking up where the 2016 reboot of Doom left off, Doom Eternal offers the merest breath of exposition before you're handed a shotgun and required to start blasting through demons at breakneck speed. And that's absolutely fine. Combat is quick, movement is quicker, and both come together in spectacular fights where hundreds of powerful enemies dispatched by the protagonist Doom Slayer - unless he stands still for a fraction of a second. As in Doom, clever tricks encourage risky, aggressive, thrill-seeking play.

Low-health enemies can be ripped apart by up close and personal attacks - "glory kills" - which drop health, encouraging the player not to retreat in the face of danger but to instead get closer.
The Shiv Sena said that on the one hand Prime Minister Narendra Modi appeals to the public to practice social distancing in view of coronavirus outbreak, while on the other he allows Parliament to function for political reasons. Modi, in a televised address to the country on Thursday, called for "resolve and restraint" to fight coronavirus and asked the entire country to observe 'Janta curfew' on Sunday. He also asked people to stay indoors and work from home as much as possible. An editorial in Sena mouthpiece 'Saamana' said that thousands of MPs, officials and members of the staff come together in Parliament. "Shutting down or slowing down the government work on one hand.
The priest gave a final benediction. There were no flowers, no embraces. Francesca Steffanoni and her mother hurried away from Bergamo's main cemetery, their furtive farewell lasting no more than 5 minutes. Bergamo is the epicenter of the hardest-hit province of Italy's hardest-hit region, Lombardy, the site of hundreds of coronavirus deaths. Families here are deprived of a bedside farewell with virus-stricken loved ones, or even a traditional funeral, and the cemetery is so overwhelmed by the number of dead that military trucks transported 65 bodies to a neighboring region for cremation this week.


Steffanoni had taken her mother to watch as the coffin containing an 82-year-old relative - a widower with a heart condition, struck down with the virus - was driven inside the imposing gates.
Gamers in the United States have already had mixed news regarding the Animal Crossing release time. Gamestop has cancelled midnight release events for New Horizons while making it possible to buy Doom Eternal early. Meanwhile, Animal Crossing will be available to buy on Friday, March 20, to help split up the two release crowds. "To ensure we adhere to CDC-recommended social distancing guidelines, we will be selling DOOM Eternal a day early on Thursday, 3/19 as a safety precaution for our customers and associates," Gamestop confirms. "Animal Crossing will release on Friday 3/20 to further help separate the crowds." And while there has been obvious disruption to how games are being released via stores this month, more news has been shared about the digital launch of New Horizons.