Lebanon in 'race against time' as coronavirus cases soar 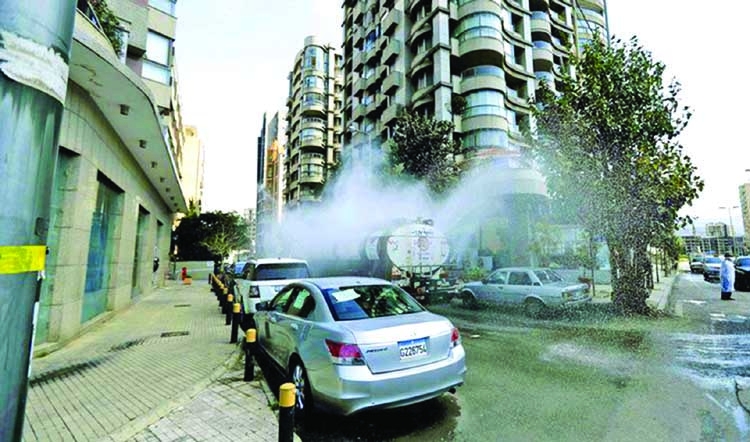 Municipal workers spray disinfectant in a street in Beirut on Saturday, as part of a government campaign to counter the spread of the new coronavirus. -AFP
Lebanese Prime Minister Hassan Diab asked the security forces on Saturday to enforce stricter measures to keep people indoors and prevent gatherings to curb a coronavirus outbreak.In a speech, Diab said this would include patrols and checkpoints, calling on the Lebanese to stay home and only go out if "absolutely necessary."
Lebanese officials called for tougher emergency measures, including curfews, after the number of coronavirus cases in the country surged to 230 on Saturday, with four victims believed to be in a critical condition, reports Arab News. The Ministry of Health urged people to "adhere to complete domestic quarantine," and warned that those who ignore repeated government warnings could face criminal prosecution.
Dr. Assem Araji, head of the Parliamentary Health Committee, demanded that emergency measures be stepped up "because people have not adhered to the domestic quarantine." As the number of coronavirus cases in Lebanon continued to climb, it was revealed that a former minister, Mohammed Safadi, had also contracted the virus.

"The result of the laboratory examination is positive. He is now in good health and will soon join the list of those recovering from coronavirus disease (COVID-19)," said his wife, former minister Violet Safadi.
Meanwhile, local police issued warnings to people breaching home quarantine and raids were carried out on businesses ignoring the ruling. Penalties were imposed on shop owners defying the government measures. Municipalities used loudspeakers to warn residents against renting out homes to Lebanese or Syrian families from outside towns and villages "for fear of spreading the virus and to maintain health security." Syrian residents were also told to refuse visits by relatives or acquaintances.
The warning reached the Palestinian refugee camps in Lebanon, which closed their entry and exit points."We are worried about the lack of medical facilities to treat the disease," an official at Ain Al-Hilweh, the largest Palestinian camp in Lebanon, told Arab News.
Medical and health teams with the Palestinian Red Crescent Society, together with Palestinian security forces, began checking people entering or leaving the camp, and disinfecting vehicles and other machinery.
About 4,000 Lebanese Red Cross volunteers are helping to transport those infected with the virus to hospital.George Kettana, director general of the Lebanese Red Cross, said: "We receive many calls from all regions and we respond to every possible case."
Kettana called on people to "be honest and frank so that we do not expose volunteers to danger."Some supplies, including protective clothing, had started to run out and international aid organizations are ready to help, he said.
President of the Syndicate of Private Hospitals, Suleiman Haroun, warned that "trying to reduce the number of daily cases is important because it is a race against time."If the number of daily cases reaches hundreds, we will not be able to receive all cases. Hospitals capacity is limited and hospitals were not initially prepared to face such a pandemic," he said.
Former Prime Minister Saad Hariri said: "The pandemic is a treacherous enemy. Please stay in your homes. The quarantine is the only safety line."Walid Jumblatt, head of the Progressive Socialist Party, said: "The disease is spreading rapidly because people refuse to stay in their homes."
"People should be forbidden at any cost from wandering around," he said.Grand Mufti Sheikh Abdul Latif Derian called for a "general amnesty for prisoners, so that we will not face a tragedy in light of the outbreak of the coronavirus, despite all the precautionary measures."