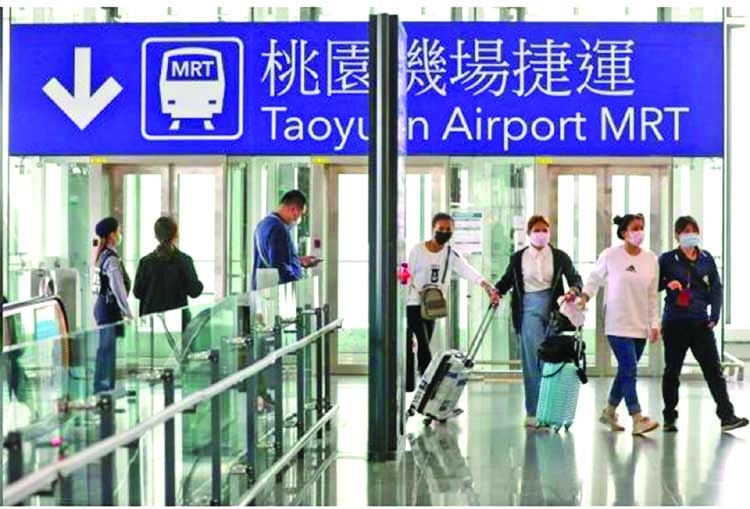 Travelers arrive at the airport as the Taiwanese government announced a ban for most foreigners entering the island, as part of preventive measures against coronavirus disease (COVID-19), at Taoyuan International airport in Taoyuan, Taiwan, Wednesday. -R
Taiwan further tightened travel controls on Sunday to help stop the spread of the coronavirus, suspending the transit of airline passengers through Taiwan from March 24 until April 7, as it announced 16 new cases bringing the total to 169. While Taiwan had in the early stages of the outbreak been successful at keeping the number of cases relatively low thanks to a good screening and contact tracing system, numbers have spiked due to an influx of infected people from abroad.
Taiwan has already stopped all foreigners apart from residence permit holders from coming to the island and is quarantining for 14 days everyone arriving on the island. From midnight on Tuesday, airline passengers will no longer be allowed to transit via Taiwan, until April 7. The move is to "reduce the cross-border movement of people and lower the risk of disease transmission", the government said in a statement.

The ban will mostly affect Taiwan's two main carriers, China Airlines and Eva Airways, which have in recent years marketed Taipei as a convenient and affordable transit airport, competing with Hong Kong and Singapore.
Both airlines have massively cut back their flights due to the impact of the virus, but are still operating and have been busy bringing back Taiwanese from the worst affected parts of the world like Europe. Taiwan has strongly advised its citizens against all overseas travel.
---Reuters, Taipei