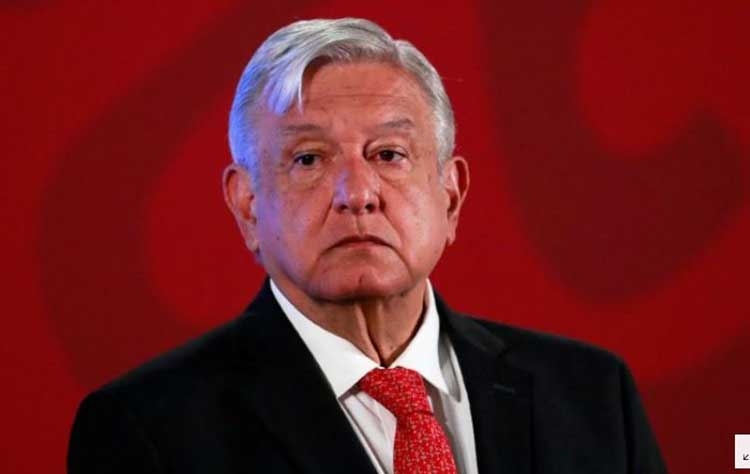 Mexico's President Andres Manuel Lopez Obrador holds a news conference at the National Palace in Mexico City, Mexico. -Reuters
As Mexico scrambles to contain the coronavirus outbreak, many initiatives aimed at tempering the threat have come not from the president, but lesser officials, businesses and ordinary people.
Mexico's peso has plunged to record lows against the dollar and analysts expect the economy to suffer a major hit. President Andres Manuel Lopez Obrador says there is no cause for alarm, and is continuing to hold regular public rallies around Mexico. He argues the country must keep going to limit damage to the economy lest it hurt the poor and the elderly.
"If I was worried, if things were out of control, I would tell you, because I always tell the truth," he said on Friday in a video posted from his seat on a plane as he prepared to take off for a weekend tour. "But that's not how things are." Others are taking precautions anyway. The lower house of Congress this week passed a bill to create a 181 billion peso emergency fund. The central bank made an unscheduled interest rate cut on Friday. Streets and offices in major cities are emptying as bosses and local leaders urge people to reduce social interaction.
Some fear that failure to do enough may end up hurting the very people the president says he wants to protect. Javier Alfaro, an employee of an international drinks firm, went into self-isolation with his girlfriend several days ago, cutting off all physical contact with family and friends.
"It bothers me a lot when I hear the president," said Alfaro, 35, who fears for his elderly mother. "I can understand worries about the economy and (the poor), but if you're putting many people at risk, it's something that's also bad for the people." Late on Thursday, Mexico City Mayor Claudia Sheinbaum, a close ally of Lopez Obrador, delivered a video message in which she urged inhabitants of the capital to stay at home. On Friday, traffic flowed freely in a city notorious for its gridlock.
The same day, governors of three opposition-run northern states unveiled a joint plan to tackle the virus, readying steps that would enable them to close public spaces, including bars. Lopez Obrador has lashed out against criticism of his response to the global pandemic by saying his adversaries are seeking to exploit fears to undermine him. On Monday, he justified ignoring his own health ministry's public advice to reduce direct human contact by saying his job was to keep up the spirits of the population.

At the same time, he has shifted responsibility for some actions to others, saying he would wind down the mass rallies when a deputy health minister standing next to him told him to.
A government source said Sheinbaum's "stay at home" broadcast had been coordinated in advance with the presidency, which a spokesman for the mayor confirmed. A spokesman for the presidency did not reply to a request for comment. Businesses, meanwhile, are taking cues from abroad.
Ana Lopez Mestre, director general of the American Chamber of Commerce, said many international companies had begun to act because they saw what was happening in other countries.
"This is something very positive that has come out of society," said Lopez Mestre, who is now working from home. At Mr. Tofu, a vegan shop in the capital's Condesa neighborhood, a young shop attendant wearing rubber gloves stopped customers from entering and took orders at the door. "I proposed this measure," she said, declining to give her name. "My whole family is old, and they're very vulnerable."
---Reuters, Mexico