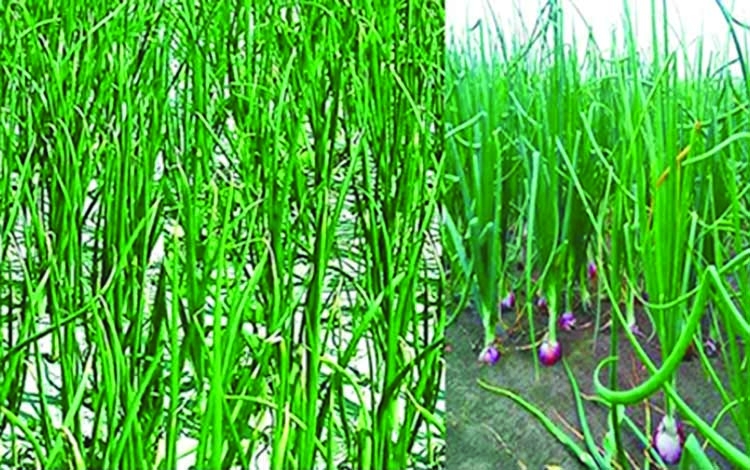 Onion harvesting is going on in full swing in the district, expecting a good yield, officials said on Sunday. Department of Agriculture Extension (DAE) sources said farmers have started to harvest onion as they are getting lucrative prices.
DAE had taken a massive program to inspire farmers to cultivate the onion abundantly here during the current season, they said, adding farmers also showed encouragement to cultivate onion witnessing its huge demand in the markets.
Md Rezaul Islam, a farmer of Alamdi village of Harirampur Upazila said the onion now is being sold at Taka 40-50 per kilogram, expressing satisfaction with the price, reports BSS.
Md Hafiz Uddin of Rupsha village under Shibalaya Upazila and Abdur Rafiq of Mouhali village under Baratia Union of Ghior Upazila also expressed happiness over onion price. This season, a total of 5,800 hectares of land were brought under onion cultivation in all seven upazilas of the district with a production target of 49,591 metric tons.
Of them, farmers cultivated onion at 90 hectares of land in Manikganj Sadar, 180 hectares at Singair upazila, 50 hectares at Saturia upazila, 900 hectares at Ghior Upazila, 80 hectares at Daulatpur upazila, 2,800 hectares at Shibalaya upazila and 1,700 hectares at Harirampur Upazila.
DAE deputy director Md. Habibur Rahman Chowdhury said Shibalaya, Harirampur and Ghior Upazilas of the district are known as the onion cultivation zones. The soil of those areas is suitable for onion cultivation. He said the onion cultivation exceeded the target this year as all agri-inputs including seeds, fertilizers and necessary advices were given to the cultivators timely.