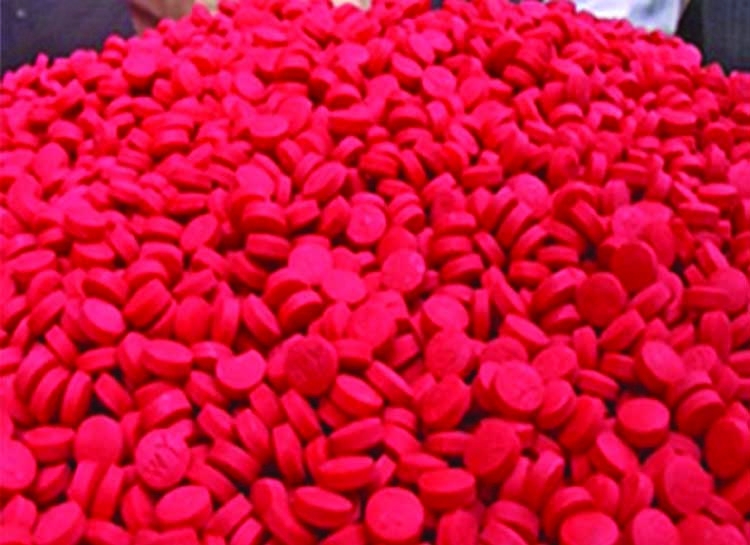 Bangladesh Coast Guard in a drive arrested two drug smugglers with one lakh 50 thousand pieces of contraband yaba tablets from the Sangu estuary beside Anwara upazila of the district early on Saturday.
The Coast Guard sources said the yaba tablets were recovered from the Sangu estuary of Raipur village under the upazila, a wooden boat was also seized in this connection.
The arrested persons were identified as Jalal Uddin, 25, and Mohammad Faruk, 26, both hailed from Anwara upazila of the district. Coast Guard East Zone Staff Officer (Operations) Lieutenant Commander Mohammad Saiful Islam told BSS that on a tip-off, a team of Bangladesh Coast Guard conducted a drive in the aforesaid area and detained two drug smugglers with one lakh 50 thousand pieces of yaba tablets.
The arrested persons were handed over to Anwara thana after filing a case, he said.
The port city Chittagong is being used as a major route for smuggling illegal drugs including yaba, a drug containing morphine and amphetamine.
At least 20 to 25 syndicates are involved in smuggling yaba in the Chittagong and Cox's Bazar area who supply it to Dhaka and other regions the country. The elite force Rapid Action Battalion (RAB), Border Guard of Bangladesh (BGB), Narcotic Controlling Department (NCD), Bangladesh Coast Guard (BCG) and police are struggling to curb the smuggling of banned drugs including Yaba.Despite special measures of the authorities, concerned smuggling of Yaba is rampant through the port city and Cox's Bazar.
According to the sources, in law enforcing agencies, there are also several syndicates in the port city to smuggle drugs, wine and medicine. They are active in Cox's Bazar, Chittagong and Bandarban hill districts.
The wine, contra-banned drugs, sex stimulating tablet Yaba are mainly   smuggled from Mayanmar, India and Thailand.
Sea is the main route of the smuggling. The drug is smuggled into the country by air and land routes mainly from Thailand, Myanmar and Nepal. Major supply of the drug comes regularly from Myanmar as Bangladesh shares around 271 km of border with the country having  208 km of land border and 63 km of river border, the source pointed out.
Sources said, some influential political leaders of both the ruling and the opposition are indirectly patronizing the yaba smuggling in the country. It is alleged that the APS's of two lawmakers of Chittagong and Cox's Bazar are directly involved with the Yaba smuggling.
According to police sources, at least 20 to 25 syndicates are active in the Chittagong and adjoining areas including Cox's Bazar, Teknaf, Bandarban for smuggling the banned yaba now. The syndicates are maintaining the network with the capital Dhaka and other divisional cities for yaba trading. They said syndicates are actually wholesaler smugglers, who distribute the yaba among retailers.