A small river in Bakkhali 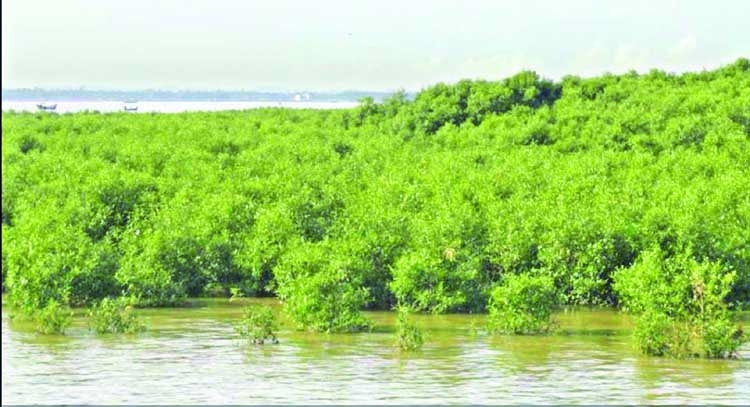 The Bakkhali, which is the second-largest river in the Cox's bazar district. - AA
A must visit place if you visit Bakhali. A silent white sand beach with sea breeze and waves. The sea will seduce you to take a bath. Hire a rickshaw van or if you have private vehicle you can visit that place. It is walking distance from Watch Tower.You can feel the Sundarban ambience.
In the back blocks of Cox's Bazar, just five kilometres by boat from Katuraghat in the town, is a little-known jungle wonderland waiting to be explored. The estuary of the Bakkhali river comprises 600 hectares of unspoilt tidal forest. The area affectionately known as the 'Little Sundarbans' has significant potential for Cox's Bazar as a new tourist attraction.
The Bakkhali, which is the second-largest river in the district, meanders from the Myanmar hills through Bandarban district and Ramu upazila, to find the Bay of Bengal at Naziratek. There, the attractive forest primarily of mangrove apple and grey mangrove trees, locally known as keora and bain trees respectively, is a habitat rich in biodiversity. In particular, it is a haven for birds.
"At present 206 bird species inhabit the forest," says the environment department's assistant director in Cox's Bazar, Sardar Shariful Islam. "That number includes 57 migratory species.
Many bird species that are threatened or endangered globally have been sighted there. The forest is also home to numerous types of fish, reptiles, oysters, crabs, turtles, shrimp and monkeys."
In addition to the wildlife, like its larger cousin, the Little Sundarbans exemplifies a beauty that is only enhanced as tides breathe in and out, reimagining and rejuvenating the forest. "The Little Sundarbans can add a new dimension to Cox's Bazar tourism," says the president of the local tour operators' association, Golam Kibria Khan. Other locals believe it could be a favoured filming location for movies, too.
The forest and environment directorate is currently implementing plans to make the area more tourist-accessible. Observation towers and a natural entertainment centre have been constructed since the project's inauguration by environment and forest ministry Secretary Dr Kamal Uddin Ahmed in August last year; it is hoped than rather than threaten the forest's integrity, carefully-managed tourism can promote its preservation.
"Modelled after practices in the Sundarbans, tourism can foster the forest's protection," says Shafiqur Rahman, coordinator of nature conservation management, the organisation implementing the project.
"Several animal species have become extinct in the Cox's Bazar area over the last few years due to climate change and habitat destruction," observes the organisation's communications officer, Biswajit Sen.
"The Little Sundarbans initiative has been undertaken with this in mind. Not only will the forest be protected but the planting of more trees which will take about three years to grow to a sizeable height, will add to its sustainability."
Indeed, according to Mohammad Alam, the president of the Nuniachhara ecologically critical area cooperative society which is a project stakeholder, environmental protection action has already been undertaken. "The authorities, along with our organisation, fought against local land grabbers to save this forest," he says. "From that, I am listed as an accused person in three court cases."
He says the observation towers have been funded with money drawn from the Climate Trust Fund. "From the towers, tourists can view birdlife and take in the forest's natural beauty," he says. "They can also help researchers and students to identify bird and wildlife species."

"It's a project that needs careful management," says Fazlul Quader Chowdhury, district president of the Bangladesh Paribesh Andolon, an environmental organisation. "If huge numbers of tourists go there, the area's biodiversity will be a risk. The movement of mechanised boats in particular needs to be limited." He suggests a reasonable entry fee for tourists might be worthwhile to cover the costs of maintaining the tourist facilities and protecting the forest.