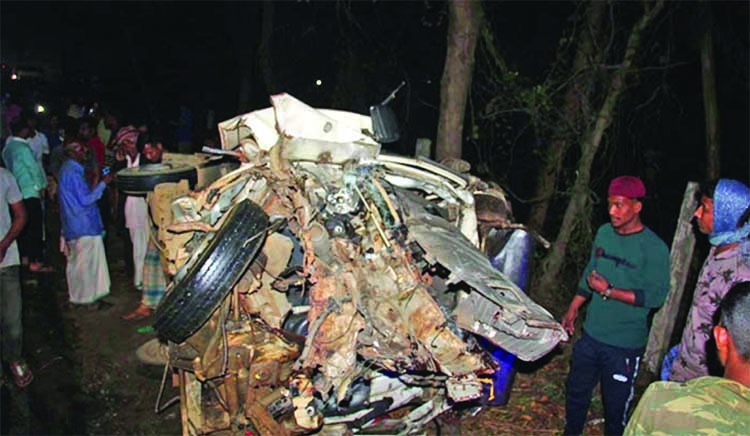 A pick-up van collided head-on with a salt-laden truck on the Chattogram-Cox's Bazar highway in Lohagara upazila's Jangalia area on Saturday. -AA
Three more people, injuried in road accident at Padua in Lohagara Upazila of Chattogram on Saturday night, died at hospital, taking death toll from the incident to 15.
Two of the deceased were identified as Mohammad Belal, 23, and Jasim Uddin, 25, sons of Abbas Uddin of Korbaniaghona area in the city.
Officer-in-Charge of Lohagara Police Station Zakir Hossain told that the accident took place at Chunti forest office area on Dhaka-Cox's Bazar Highway around 10:15pm.
A truck hit a human-hauler coming from the opposite direction, killing 10 people on the spot and injuring seven others.
The injured were taken to Lohagara Health Complex where doctors declared three of the injured dead.Four of the injured were taken to Chattogram Medical College Hospital. Two of them succumbed to their injuries early morning, the OC said quoting doctors.
The bodies of the deceased have been kept at the hospital. Rashedul Islam, officer-in-charge of (investigation) of Lohagara Police Station, said 17 people were on the human hauler at the time of accident and 15 of them were killed, including its driver.
Soon after the incident, police seized the truck but its driver and helper managed to flee, the OC added. Road accidents claim thousands of lives every year in Bangladesh. Last year, 5,227 people were killed and 6,953 others injured in road crashes across the country, according to a road safety advocacy group.
In February, a World Bank report said Bangladesh needs to invest an estimated extra $7.8 billion over the next decade to halve its road crash fatalities.
Although there was a decline in the number of road accidents, the country saw more deaths on roads in the immediate-past year of 2019 compared to 2018.
A total of 4,580 people were killed and 10,828 others injured in 4,317 road accidents in 2018 while 4,628 people lost their lives and 8,621 others suffered injuries in 4,219 accidents from January 1 to December 31 last year, according to a report of Shipping and Communication Reporters' Forum (SCRF).
The report 'Annual Road Accident Report 2019' was prepared based on news published in 24 national dailies, 10 regional newspapers and nine online news portals and news agencies.The accidents took place on highways, national highways and national, inter-district and regional roads.The journalists' platform identified some reasons for reduction in the number of road accidents across the country last year.
These include growing public awareness by publishing reports on road transportation on the media round the year, arranging different programmes against road accidents by different social organisations, road transport and bridges minister's active presence on roads, increased responsibility of police personnel and mobile courts against faulty vehicles and fake driving licences, identifying different risky turning points and establishing cautionary signs there and road repairs.
According to the report, 411 people, including 53 women and 71 children, lost their lives and 725 others received injuries in 383 accidents in January last year while around 401 accidents took place in February when 415 people were killed and 884 others injured. Of the deceased, 58 were women and 62 children.