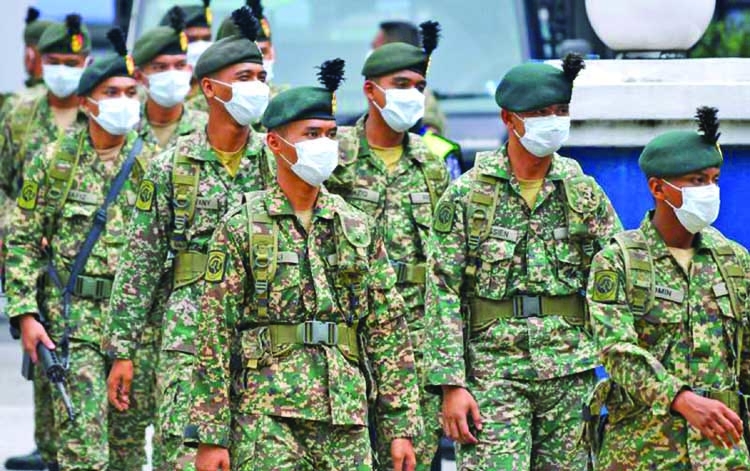 Malaysia deployed the army on Sunday to enforce a two-week curb on travel in a country that has the highest number of coronavirus cases in Southeast Asia, most of them linked to a mass religious gathering.
The country has so far reported nine deaths and 1,183 infections. Southeast Asia has recorded a total of more than 3,200 positive cases, with the other big centers being Thailand, Indonesia, Singapore and the Philippines. Malaysia called in the army after some people continued to defy the restrictions that came into force on Wednesday, the defence minister said in a briefing after the deployment started at noon.
"Even though police have said 90% compliance now, 10% is not a small number," Ismail Sabri Yaakob said."Among the things that will be done jointly by the police and army include road blocks. Likewise for patrols in urban and rural areas, maintaining security at hospitals, managing areas that are congested and may not abide by the order such as markets."
The four-day Islamic gathering held at a mosque near the Malaysian capital Kuala Lumpur is connected to 60% of all the cases in the country, whose tally is only behind those of China and South Korea in Asia.
Worshippers who attended the event are cooperating with authorities, an organizer said in a statement, after the government said on Thursday that it had yet to trace 4,000 of the 14,500 Malaysian residents who attended.The health ministry said on Saturday it expected the number of cases to spike next week as it tried to track down unscreened participants of the Feb 27-March 1 congregation.
"After hearing reports of thousands or participants yet to be screened, many had returned to their district health departments or hospitals repeatedly until their names and details were recorded," Abdullah Cheong, a leader of the event's organizing team, said on Saturday.
"We are prepared and have given our full commitment to help the authorities deal with the pandemic."He also said 12,500 people attended the gathering, including foreigners and 200 Rohingya refugees. The government has put the number at 16,000.