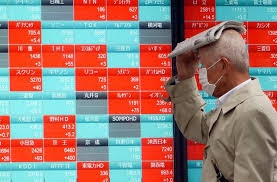 U.S. futures dropped more than 4% and Australia's share benchmark initially plunged 8.5% as work on more stimulus for the U.S. economy hit snags in the U.S. Senate.
Shares dropped more than 4% in Hong Kong and 5% in South Korea. The Shanghai Composite index lost 2.6%. However, Japan's Nikkei 225 index held steady, gaining 0.5% in early trading Monday.
Top-level negotiations between U.S. Congress and the White House continued after the Senate voted against advancing the $2 trillion economic rescue package.
The Democrats said the bill was tilted too much toward aiding corporations and would not do enough to help individuals and healthcare providers.
By 9 p.m. EST, the S&P 500 future contract was down 4.2% at 2,194.40. The future for the Dow dropped 4.3% to 18,220.00.
Markets reopened after the weekend to an altered business landscape as lockdowns and closures intended to halt the spread of the new coronavirus expanded to include many cities around the world and the number of people infected surged past 300,000.
Sydney's S&P/ASX 200 was trading 7.8% lower at 4,443.00 after plunging sharply just after the open. Australia announced at 66.4 billion Australian dollar ($38.5 billion) stimulus package on Sunday. That's in addition to an earlier mandated $10 billion package and other stimulus from the central bank.
South Korea's Kospi lost 4.4% to 1,497.40. Hong Kong's Hang Seng index also lost 4.4%, to 21,809.38.
The Nikkei was at 16,633.46.
Stocks fell sharply on Wall Street and the price of oil sank again Friday as New York became the latest state to mandate that nearly all workers stay home to limit the spread of the coronavirus. California and several other states have also imposed limits on business activity.
The S&P 500 lost 4.3% to 2,304.92 while the Dow skidded 4.6% to 19,173.98. The Nasdaq composite index lost 3.8% to 6,879.52.
The week will bring fresh data that are likely to underscore the damage to economies from the outbreak of the virus that originated in China.
A sharp surge in cases and in deaths across the region, especially in Southeast Asia, have also raised the level of alarm.
Shutdowns mean less demand for oil. U.S. crude dropped about 21% and moved below $20 a barrel for first time since February 2002. However, on Monday benchmark crude was at $22.49 per barrel in electronic trading on the New York Mercantile Exchange, having lost 14 cents.
Brent crude, the international standard, dropped $1.08 to $25.90 per barrel.
Sweeping shutdowns in many countries and resulting layoffs have raised the likelihood of a global recession.
Ultimately, investors say they need to see the number of new infections stop accelerating for the market's volatile skid to ease.
The S&P 500, the benchmark for many index funds held in retirement accounts and the measure preferred by professional investors, is down 31.1% since reaching a record high a month ago. Last week marked its biggest weekly loss since October 2008 during the global financial crisis.
Investors have continued to seek safety in U.S. government bonds, driving their yields broadly lower. The 10-year Treasury yield, which influences interest rates on mortgages and other consumer loans, slid to 0.80% early Monday from 0.94% late Friday.
The U.S. rescue package is the biggest effort yet to said households and shore up the U.S. economy, the world's biggest.
Governments and central banks are trying to stave off or at least alleviate the impact of a recession.
As investors scramble for cash, demand for the U.S. dollar has been soaring. The dollar was at 110.08 Japanese yen on Monday, slightly lower than the 110.83 yen level it was trading at late Friday.
The euro rose to $1.0720 from $1.0697.
More than 14,400 people have died among the 335,000 cases of the virus confirmed worldwide. Nearly 100,000 people have recovered.
For most people, the coronavirus causes only mild or moderate symptoms, such as fever and cough, and those with mild illness recover in about two weeks. Severe illness including pneumonia can occur, especially in the elderly and people with existing health problems, and recovery could take six weeks in such cases.