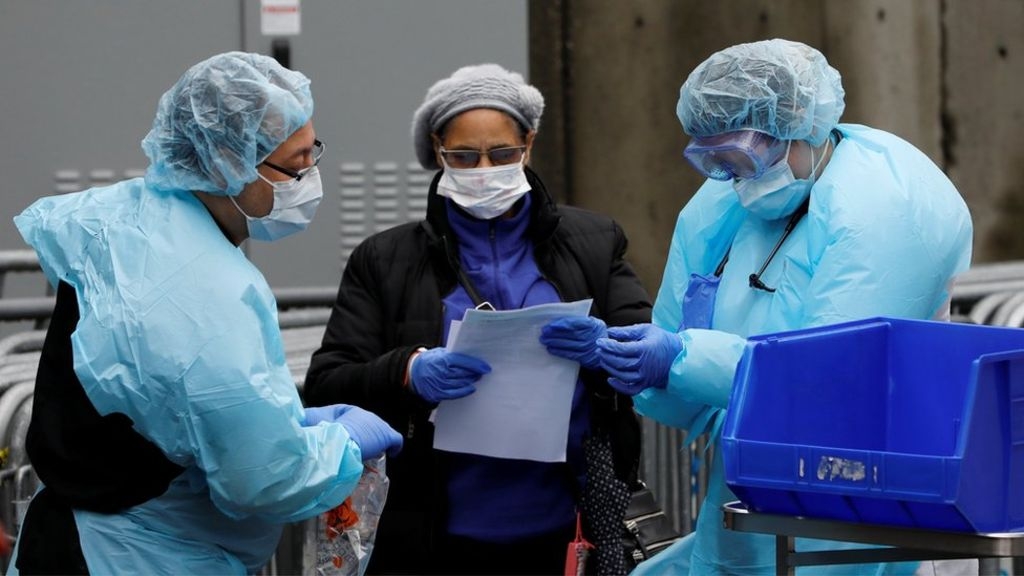 The coronavirus outbreak in New York will get worse, with damage accelerated by shortages of key medical supplies, the city's mayor has said.
"We're about 10 days away from seeing widespread shortages," Bill de Blasio said on Sunday. "If we don't get more ventilators people will die."
New York state has become the epicentre of the outbreak in the US and accounts for almost half of the country's cases.
There are now 31,057 confirmed cases nationwide, with 390 deaths.
On Sunday, the state's Governor Andrew Cuomo said 15,168 people had tested positive for the virus., an increase of more than 4,000 from the previous day.
"All Americans deserve the blunt truth," Mr de Blasio told NBC News. "It's only getting worse, and in fact April and May are going to be a lot worse."
New York now accounts for roughly 5% of Covid-19 cases worldwide.
On Friday, President Donald Trump approved a major disaster declaration for the state which gave it access to billions of dollars of federal aid.
However, Mr de Blasio has continued to criticise the administration for what he views as an inadequate response.
"I cannot be blunt enough: if the president doesn't act, people will die who could have lived otherwise," he said. "This is going to be the greatest crisis, domestically, since the Great Depression," he added, referring to the economic crisis of the 1930s.
Speaking at a news conference at the White House on Sunday, Mr Trump said he had also approved a major disaster declaration for Washington state and would approve a similar measure for California.
"This is a challenging time for all Americans. We're enduring a great national trial," he said.
President Trump also said a number of medical supplies were being sent to locations nationwide, as well as emergency medical stations for New York, Washington and California, the worst-hit states.
Doctors across New York have reported depleted medical supplies and a lack of protective gear for healthcare workers on the frontlines of the outbreak.
Warnings of such shortages have reverberated across the country as other state governors have pleaded with the federal government to make more supplies available.
In California, officials instructed hospitals to restrict coronavirus testing. Meanwhile, a hospital in Washington state - once the centre of the US outbreak - said it could run out of ventilators by April.
And on Sunday, Illinois Governor JB Pritzker said states were "competing against each other" for virus supplies.
"We need millions of masks and hundreds of thousands of gowns and gloves," he said. "We're getting just a fraction of that. So, we're out on the open market competing for these items that we so badly need."
An almost $2 trillion (£1.7 trillion) emergency stimulus bill intended to blunt the punishing economic impact of the pandemic failed to pass the US Senate on Sunday.
The bill got 47 votes, falling short of the 60 needed in the 100-member chamber.
Democrats raised objections to the bill with Senate minority leader Chuck Schumer saying it had "many, many problems". Democrats accused Republicans of wanting to bail out big businesses.
Talks between Democrats and the White House are continuing.