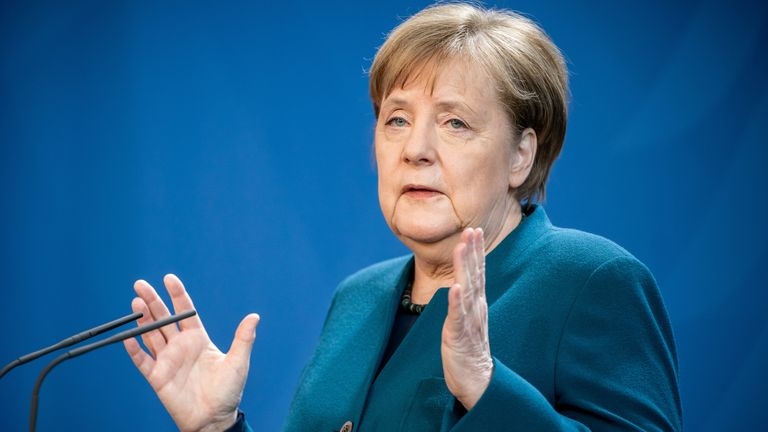 German chancellor Angela Merkel went into quarantine on Sunday after coming into contact with a Covid-19 coronavirus-infected doctor shortly after announcing more curbs on social interaction to slow the spread of the disease.
Merkel, 65, will continue her work from home and will submit to repeated tests over the next few days, her spokesman said in a statement, adding it is too soon for a conclusive test yet.
Merkel had on Friday afternoon received a vaccine shot against pneumococcus, a pneumonia-causing bacteria, from a doctor who later tested positive for coronavirus, according to the statement.
Merkel earlier on Sunday said in a televised press briefing that Germany will ban public meetings of more than two people, amid a raft of further measures.
“The great aim is to gain time in the fight against the virus,” she said, citing an agreement between the federal government and regional states.
For at least the next two weeks, people will not be allowed to form groups of three or more in public unless they live together in the same household, or the gathering is work-related, she added.
Restaurants can only serve patrons via takeaway, while hairdressers and beauty, massage and tattoo parlours must close.
Regional states in Germany had previously taken differing approaches in the fight against the virus. Bavaria and smaller Saarland had gone furthest, imposing restrictions to keep people inside their homes save for a number of work-related exceptions.
“We are reducing public life and social interaction further and we are making sure to impose the same rules in principle across Germany,” Merkel said.
Last year, Merkel suffered several bouts of shaking at public events, sparking speculation about her health.
“I am aware of the responsibility of my office,” she told reporters last July after the tremor episodes. “I behave appropriately as far as my health is concerned ... I look after my health.”
Merkel has said she will not seek a fifth term as chancellor in federal elections due by Oct 2021. She has loomed large on the European stage since 2005, helping guide the EU through the euro zone crisis and opening Germany’s doors to migrants fleeing war in the Middle East in 2015, a move that still divides the bloc and her country. - Reuters